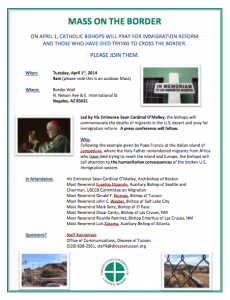 Trip follows example of Pope Francis at Lampedusa Border bishops will join Committee to celebrate Mass in remembrance of the dead Immigration reform needed to end suffering, redeem the nation March 6, 2014 WASHINGTON—The U.S. Conference of Catholic Bishops (USCCB) Committee on Migration, joined by bishops on the border, will travel to Nogales, Arizona, March 30-April 1 to tour the U.S.-Mexico border and celebrate Mass on behalf of the close to 6,000 migrants who have died in the U.S. … END_OF_DOCUMENT_TOKEN_TO_BE_REPLACED 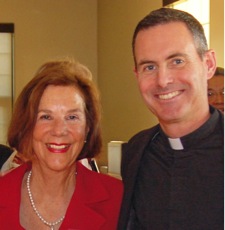 By: Roxane Ramos Lucy Howell, Fund Development Committee Chair For Lucy Howell, working on immigration issues and advocating for more compassionate and just treatment of the undocumented migrants who cross into the U.S. is not only a matter of conscience. It is a matter of faith, gratefulness for the blessings in her life, and a conviction to help those in less fortunate circumstances. As a mother who raised four children and grandmother who dotes on four grandkids, she finds the plight of … END_OF_DOCUMENT_TOKEN_TO_BE_REPLACED 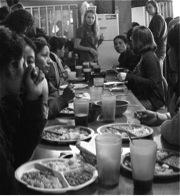 By: Roxane Ramos The number of women migrants from Mexico has doubled over the last 20 years. They face greater, graver dangers than their male counterparts, but still make the journey. Why? Even as migration across the U.S.–Mexico border has leveled off in recent years—due to increased militarization along the border and the frightening hazards of a desert crossing—all experts agree that the number of women migrants has increased substantially. Women make up 25–45% of undocumented … END_OF_DOCUMENT_TOKEN_TO_BE_REPLACED 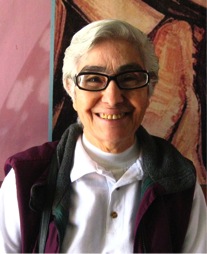 By: Roxane Ramos The Missionary Sisters of the Eucharist provide aid, comfort and a temporary home to deported migrants. The first thing you notice about the Kino Border Initiative’s Aid Center for Deported Migrants is the overwhelming warmth and welcoming atmosphere of the place. This modest, makeshift space, known as the comedor, accommodates 50–60 recently deported migrants for breakfast and lunch everyday, including holidays. And the substantive meals that issue forth from the tiny, … END_OF_DOCUMENT_TOKEN_TO_BE_REPLACED