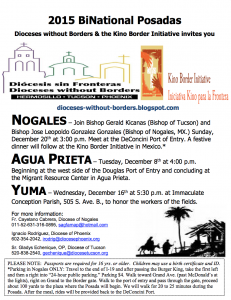 This month, we bring you news of the latest report prepared by the Washington Office on Latin America which includes data from the KBI as well as a local feature about the comedor and information about two upcoming KBI events—the Bi-National Posada in Nogales, Sonora and the annual Fundraising Dinner in Phoenix. WOLA Report: The Washington Office on Latin America (WOLA) has released a report called An Uncertain Path: Justice for Crimes and Human Rights Violations against Migrants and … END_OF_DOCUMENT_TOKEN_TO_BE_REPLACED 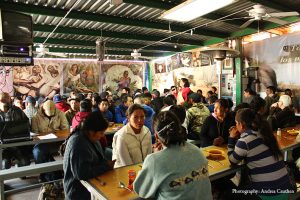 Have you considered making a monthly contribution to support our ongoing mission and ministry throughout the year? You can sign up to make a reoccurring gift of any amount through PayPal on the Donate page of our website:  www.kinoborderinitiative.org/get-involved/donate/. With your commitment to make a monthly gift, you will join a very special group of donors we call the “KBI Vecinos” (Spanish for “neighbors”). Your year-round support allows us to provide ongoing care and support for deported … END_OF_DOCUMENT_TOKEN_TO_BE_REPLACED