As the Trump administration continues its crackdown on undocumented immigrants—both the newly arrived and long-term residents of the U.S.—plans and funding for more detention centers proceed while abuses, human rights violations, and poor conditions in existing facilities and concerns about asylum seekers remain ongoing issues. The U.S. operates the largest immigration detention system in the world, detaining close to 360,000 people in 2016 in more than 200 facilities across the country. … END_OF_DOCUMENT_TOKEN_TO_BE_REPLACED

This month, we share the latest news about obstructions and crackdowns in the immigration system, affecting asylum seekers, detainees at the U.S.–Mexico border, and most recently, immigrant spouses of U.S. citizens. In addition, we include coverage of Border Patrol destruction of supplies left in the desert for migrants and arrests of volunteers who put them there. Prosecution an Obstacle to Asylum: In January, Human Rights First released a comprehensive report on the Trump administration’s … END_OF_DOCUMENT_TOKEN_TO_BE_REPLACED 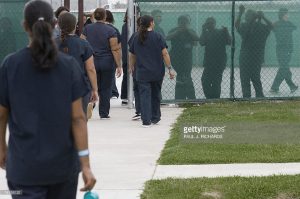 This week the Senate is considering an immigration bill on the floor for the first time in nearly five years. As the text and amendments will be fast moving, these next few days are a critical time for you to call your Senators and urge them to promote humane and just policy. Consider using the scripts at https://www.kinoborderinitiative.org/act/ to speak for support for DREAMers, against an expansion of immigration detention, and for humane border policies. For specific ideas on amendments and … END_OF_DOCUMENT_TOKEN_TO_BE_REPLACED

The KBI hosted the Third Annual Walking in Mercy Youth Summit and several immersions; Father Pete Neeley spoke about the border and the KBI’s mission in Akron, Ohio; and there are fundraising efforts, from the large-scale to the personal, around the corner—the Eighth Annual Kino Border Initiative Dinner on March 3 in Phoenix, Arizona and the efforts of a KBI immersion alum who is running the L.A. Marathon to raise money for the KBI. Heartfelt thanks to all! Annual Phoenix Dinner: The Eighth … END_OF_DOCUMENT_TOKEN_TO_BE_REPLACED