On a brisk evening in the small town of Tecpán in Central Mexico, the mafia set flames to Alfonso Mendoza’s vehicle and house while his wife, daughters, sons-in-law, and grandchildren were asleep inside. He was just five blocks away, mourning the death of his twenty-year-old nephew, Omar who had been murdered mere hours before. The mafia had total control of Tecpán and the Mendoza family had ultimately fallen into its web of violence.

“Everything begins with them seeing people prosper, seeing them create a good future for their children,” explains Alfonso’s daughter, María. “They obviously want to benefit. That’s what they do–they extort the people.” She goes on to explain the dynamic of her town, which will go unnamed for the family’s protection. The mafia monitors the businesses and their owners, down to the smallest convenience store and tortilla shop, charging each a ‘plaza,’ or tax, to ensure the security and potential longevity of the business. “According to them, it is to protect you, so that no one impedes you and no one hurts your business. But it’s them that’s doing this. If you don’t pay, that’s when the threats begin.”

Alfonso and his five brothers lived happily in Tecpán, all of whom were small business owners. “Something that the members of the mafia didn’t like, and realized was happening, is that we were thriving,” says Alfonso. “The extortions and payments began, to which the government is indifferent.” For the brothers who stayed in Tecpán, their life consisted of managing periodic extortion payments as part of keeping their businesses afloat and paying the consequences when they refused to do so. Over the years, the family has lived under the watchful eyes of the mafia. “They took away our peace,” says María. “We can’t live in peace.”

In July of 2019, things became much worse. The mafia kidnapped Omar, holding him for ransom until the family collectively paid over 40,000 USD for his safe return. His kidnappers intentionally unmasked themselves before his release so he would recognize and fear those faces when he saw them in Tecpán. He was liberated with the condition that he would tell no one who they were. One month later, they murdered Omar’s father, Alfonso’s Alfonso filed a report with the state police to press charges for his brother’s murder. The case went uninvestigated, but not unnoticed.

On January 28th of this year, while Omar was walking down the street with his wife and two young children, he was killed by the mafia. The family called the police, but they never came. They themselves transported his body to his home where the family gathered for the wake, mourning throughout the night until his burial the next day. It was in the early hours of the morning, right before dawn on January 29th that the mafia set fire to Alfonso’s home. That very day, Alfonso and his family decided to flee. “We were a close-knit family. And from one day to the next, we were torn apart,” says María. 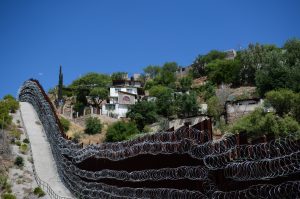 Alfonso and his family arrived in Nogales in March, immediately presenting themselves at the port of entry to seek asylum. “We went directly to seek asylum but a Mexican official said: ‘get out of here or we’ll take you to the police and they’ll lock you up,” María explains. “But why? It is our right. We have the right to seek asylum. We aren’t delinquents. We are just exercising our right.”

Alfonso and his family have been living in Nogales since March. “We’re still here, waiting for a response–that they open the border, that someone helps us because we are scared for our lives.”. Like many migrants, Alfonso and his family are waiting with no sort of end date in sight. They can’t move forward, but they know they can’t go back to Tecpán, and they fear the widespread presence of the mafia within Mexico. María explains, “living in Nogales is very uncertain, emotionally unstable. You are living, but you’re not living…. But you don’t have a life because you don’t know what you’re waiting for.”

A family of three generations, the youngest is María’s daughter, Paula, who will turn two in December. As a mother, María has simple wishes for Paula: “The dream that I have for my daughter is that she have a peaceful and dignified life, where her rights are respected….that she be a normal little girl.”