Andrea remembers her life in Michoacán with nostalgia: the views of the mountains, her family’s home, the culture that surrounded them. Her husband had a stable job working as a brick-layer and she was able to stay home with her two young sons, Jaime and Cesar. As she speaks of their home, she envisions and describes the field beside their house where her sons could play and run free. “We were happy, we never thought we’d leave.” 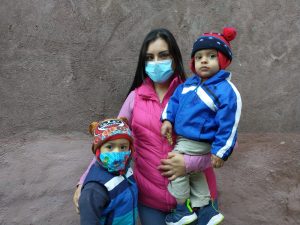 One November evening in 2019, her husband stepped out on a simple errand to buy milk. That is when he was threatened by the mafia who said that there would be deadly consequences to come if he did not agree to work with them. The next morning, as Andrea was making tortillas for breakfast for Jaime and Cesar, several men broke into her home looking for her husband, who had already left for work. However, they guaranteed their return.

That very night, Andrea, her husband, and their two children packed a few changes of clothes and left their home. “We had to leave in secret, without saying goodbye to anyone, not even family,” she says. “The journey was difficult because we had to walk three hours from our house to where we could take the bus to the city to catch the bus that would bring us here.” They rode the bus, two nights and an entire day to arrive in Nogales where they immediately presented themselves at the port of entry. They were surprised to find that they could not make their asylum claim.. Instead, they were given a number, and told that the wait would be a maximum of three months. Over a year later, they are still waiting.

“It’s a right,” she asserts. “We have the right to request asylum, the right to ask the United States for the protection that we don’t have in our country.” However, the Trump Administration has denied asylum seekers like Andrea due process, forcing her to wait in the very country in which she is being persecuted. “We’re scared. We’re scared that they will find us here,” she says. With nowhere else to go, they have decided to wait in Nogales until the United States resumes accepting asylum claims. However, apart from the fear they experience in Nogales, they also struggle economically and rely heavily on assistance from the KBI. “In my case, we don’t have support from people in other places. We survive off of what we earn from our work and with the support of Kino.”

Amid economic precariousness and lack of safety, Andrea has joined fellow migrants in speaking about the situation in which many asylum seekers find themselves and pressuring the incoming administration to restore asylum. Her decision to leave Michocán, persevere in Nogales, and add her voice to the SaveAsylum movement is rooted in the dream that she has for Jaime and Cesar. “The dream that I have for my family is to have a better future, without violence… That they don’t feel the fear that we feel going out in the streets thinking that we might not return home.” 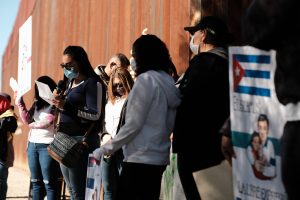