On Saturday, December 18th, 2021, also known as International Day of the Migrant, Bishop Edward Joseph Weisenburger of Tucson accompanied migrant families in Nogales who peacefully reenacted the Holy Family’s journey to seek refuge. Asylum seekers waiting in Nogales, accompanied by dozens of faith leaders and advocates, walked in procession from the downtown port of entry to the Kino Border Initiative while praying, singing, sharing testimonies and inviting public officials to take action to support families, like their, who seek refuge and yet are stranded in danger in Mexican border towns. This action comes on the heels of the recent reimplementation of MPP, otherwise known as Migrant Protection Protocols or the “Remain in Mexico” policy; as well as, the recent renewal of Title 42.

Las Posadas, (which means, “The Inns”), is a religious festival celebrated in Mexico and various Latin American countries. Families dress up as Joseph and Mary to reenact the Holy Family’s journey from Nazareth to Bethlehem in search of a safe place to give birth to their son, Jesus. This year, we collaborated with Ignatian Solidarity Network in featuring a Virtual Posadas to offer a way audiences can join us in daily experiences of prayer, music, reflection and action as we journey with the Holy Family and migrants at the U.S.-Mexico border. 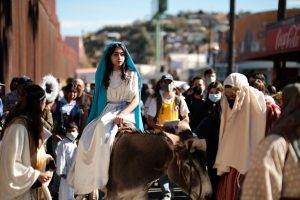 This Posada season takes on a very different tone for asylum seekers and humanitarian aid groups in Nogales as countless migrants have arrived this year to the U.S.-Mexico border seeking the very refuge that the Holy Family once sought long ago. Cruel and inhuman policies such as Title 42 and MPP turn their back on people seeking asylum and endanger their lives. One of the migrant organizers, who dressed up as the Virgin Mary for the Posada action told the audience, “Just as the Holy Family, we want posada. We desperately need refuge.”

The migrants speaking out at the various #SaveAsylum actions this year continue expressing their disappointment in President Biden for not living up to his promises throughout his campaign and during his presidency. “It’s unjust that during the Christmas season, families everywhere are gathering together, including the many politicians and Biden’s family, yet we are still being ignored here at the border. We are still being separated. We are still being expelled. We are still exposed to the same danger from where we fled from.”

Las Posadas and the Procession 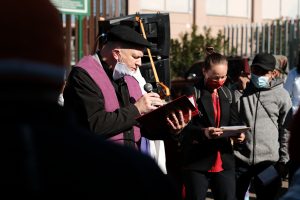 Bishop Weisenburger initiated the Posada procession by grounding the action in historical and biblical roots. He said:

The posada we celebrate today has its roots in the historical memory of Jesus, who over 2,000 years ago, from his birth to his death, was persecuted. His parents, Joseph and Mary, were victims of the domination of the Roman Empire. They experienced the suffering of migrants, to the point of bringing their son into the world in a manger surrounded by animals, so that they could obey the decree of the Roman Emperor. This journey of Joseph and Mary, with Jesus in her womb, their struggle to find hospitality and acceptance of solidarity with the poor by giving birth to their son in a manger: this is the story of faith that motivates us, and which we celebrate today. 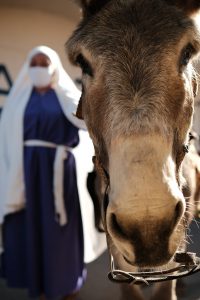 One of the migrant organizers followed Bishop’s opening remarks with situating the Posada within the current historical context. She told the crowd:

The poor, throughout all of history, have been rejected, condemned to death by poverty and all that goes with it. Migrants in general are among “the poor.” Their migration exists as a consequence of a system that produces poverty: the greed of the few that appropriates resources destined for all; victims of organized crime, corrupt authorities, exclusive and racist laws, of the dehumanization of the people of God.

That system of greed, dehumanization, and exclusion has given rise to the policies that  we witness and resist today. Thousands of families flee to the United States to escape violence in their homes. Title 42 has been in place for nearly two years, and blocks these families from accessing legal forms of migration. Instead of evaluating a person’s needs for protection, the U.S. Government returns them to Mexico without a chance to explain the threats they face.

When it is accessible, the process to request asylum in the United States is long and difficult. Earlier this month, the Biden Administration reinstated the so-called Migrant Protection Protocols, otherwise known as “Remain in Mexico.” The Administration began forcing asylum seekers to undergo the asylum process while waiting in dangerous Mexican border cities instead of in the United States, where they are safer. Instead of compassion and welcome, the migrants waiting in Nogales have faced rejection, discrimination, and exploitation.

Faith-based leaders and migrants began their procession at the downtown port of entry and marched along the border wall until they reached Kino Border Initiative. In all, there were four stops along the route to symbolize the four main rejections migrants seeking asylum face.

The Four Rejections: Rejection at the Port of Entry, Rejection in Nogales, Sonora, Rejection from Border Patrol, Rejection During Expulsion

The First Stop: Rejection at the Port of Entry 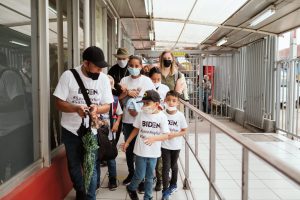 The Deconcini Port of Entry was the first stop in the procession. This is the same Port of Entry where Laura and her family were rejected from on September 25th and Lisandro and his family were rejected from on November 8th. At this stop, one of the migrant organizer’s read Lisandro’s testimonio about being unjustly turned away by Customs and Border Protection agents when he approached the port of entry to seek asylum. Following the testimonio, allies read a call to action:

In recent months, no family has been able to access the asylum process at the ports of entry in Nogales, including those cases of extreme vulnerability. We ask the Director of Field Operations in the Tucson Sector, and the officials at the port of entry in Nogales, to use their power of discretion to process the most extreme cases, people who can no longer wait for an answer.

The migrants then sang a Posada song where they adapted the lyrics to reflect the contemporary asylum crisis that they face. In the traditional call and response fashion of a Posada song, they sang it from the perspective of the migrant seeking asylum and the Customs and Border Protection agents. 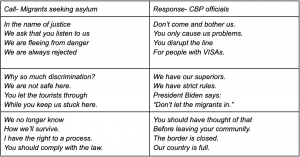 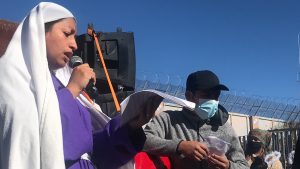 After a prayer, the procession continued onward towards the next stop, the Mexican Immigration field office. Migrants shared testimonies similar to the ones that Jose and Lisandro shared during the press conference. Issues such as workplace discrimination, lack of access to education, lack of access to healthcare, unaffordable housing are pervasive in Nogales; as migrants are often targets of exploitation and violence.

Allies read a call to action to the crowd and loud enough so that Mexican Immigration officials could hear from outside of their offices. They read:

Even though two months ago, Nogales Sonora Mayor Juan Francisco Gim Nogales met with migrants in Kino and committed to address their needs for education, health care and work, he has not followed up on these promises, and has canceled meetings with Kino to follow up on two occasions. Mayor Juan Gim Nogales, we ask that you meet with migrant leaders in Kino and take steps at once to fulfill these promises. 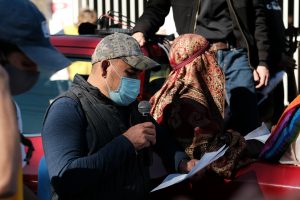 At the third stop along the border wall, migrants shared testimonies about abuse at the hands of Border Patrol. Advocates have been denouncing systemic patterns of abuse for years. This year KBI and NETWORK teamed up to release a joint report in August entitled, “Due Process Denied”- CBP Abuses at the Border (October 2020-July 2021). That report illustrates more than 30 cases of abuse by CBP, in the Nogales secor, that were filed by Kino Border Initiative.

Allies read out loud the following call to action:

Members of Congress in the United States have the power and the responsibility to assure that the government and its agencies comply with the Constitution and respect the rights of people in the United States. We know that a lot of people suffer from inhumane treatment and the violation of their rights in their interactions with Border Patrol. We ask that members of Congress in the United States open an investigation into the violations of the rights of migrants that are occurring, especially against families who cross through the desert. We also ask that you pressure them to create an independent agency to hold officials from the U.S. Department of Homeland Security to account, seeing as the internal investigations haven’t been sufficient to stem the patterns of corruption and abuse that exist within the agency.

Arriving at a port of entry hoping to receive protection, instead we find a mockery of our dignity. We find rejection and discrimination. An immigration agent told us that, ‘They only come to the U.S. to bring us COVID.’ Even with insults that I will not repeat here, they blamed us. When I wanted to show him my negative COVID test, he wouldn’t let me get near him. Another migration agent told us that he was not going to give us water because everyone else would want water too. Later, they separated me from my family, put me in a vehicle full of mud and garbage, and without asking anything, they expelled me to Mexico. This is my experience, and sadly it is just one of many experiences of the racism that thousands of migrants have experienced in encounters with the CBP under [the] Title 42 policy. – Alejandro*, a migrant seeking protection in the U.S. who was turned away under Title 42.

Alejandro’s testimonio is just one of the many harrowing experiences that migrants face during their search to request asylum. Policies such as Title 42 have been used to expel migrants without providing them the opportunity to seek protection in the United States. As migrants in the #SaveAsylum coalition has been telling the press consistently throughout the life of this policy, “Title 42 is a racist policy.”, one that denies them their right to seek asylum. As Josue*, an asylum seek from southern Mexico and one of the migrant organizers from the #SaveAsylum coalition told the press back in July, “On the border between the U.S. and Mexico, U.S. officials are rejecting people who have experienced persecution and violence without giving them a chance to make their case…To reject asylum seekers it is to hand them a death sentence.” 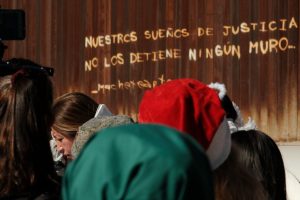 We know that the denial of the right to asylum is against international law and U.S. law. We ask that President Biden end Title 42 at once and open a path to give access to the asylum process for people seeking protection. 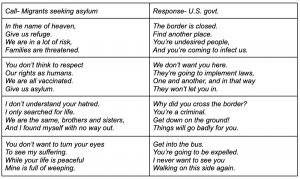 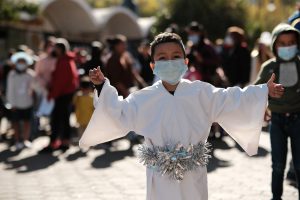 The procession ended at the Kino Border Initiative. Sister Tracey Horan, SP gave a warm welcome to all migrant families and shared the following prayer: 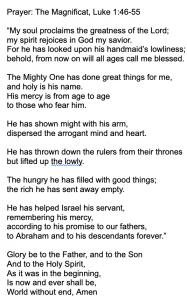 We at KBI ground ourselves in our faith-based values that affirm that there is a spiritual dimension to the crisis of asylum and deportation. We draw parallels between the migrants caught in this contemporary crisis and what our Holy Family- Mary, Joseph, and Jesus- endured to escape persecution and imminent death, and to find refuge in Egypt. According to the Gospel of Matthew, “Every stranger who knocks at our door is an opportunity for an encounter with Jesus Christ, who identifies with the welcomed and rejected strangers of every age.” (Matthew 25:35-43). We heed His Holiness Pope Francis’ message on World Day of Migrants and Refugees to be in solidarity with the sojourner by “welcoming, protecting, promoting and integrating migrants and refugees.” It is our spiritual, moral and humanitarian imperative to put an end to the countless harmful patterns and practices and to build support for protection and aid for migrants seeking asylum.

Migrant children broke open Piñatas, a Posada tradition, and families broke bread with KBI staff for the remainder of the afternoon.

We ended out Posada with this welcome song written by the migrants. 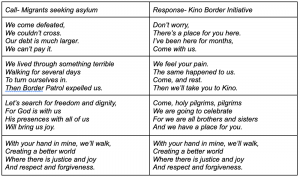