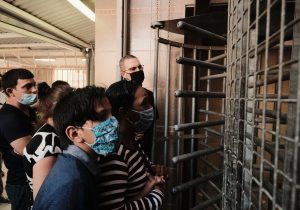 On Friday, August 21st migrants, asylum seekers, faith leaders, and community members came together in Nogales,Sonora to accompany an asylum seeker, Elena (pseudonym to protect her identity) and her 12 year old son, to the port of entry to claim asylum. Father Sean Carroll, Jesuit Priest and Executive Director of Kino Border Initiative, approached the port with them both. This action is in response to the Administration’s suspension of the processing of asylum claims that has been in effect since March 20th of this year. Whereas the US government does not accept, recognize, nor receive claims to asylum at the border, we came together to support Elena, and all asylum seekers, in exercising their legal right under international and US law to claim asylum.

Elena’s resiliency and hope have radiated since the day she first arrived at Kino Border Initiative in April. Both radiated again on the evening of August 21st as she bravely approached the port of entry in downtown Nogales to claim asylum. She confronted an agent and entity controlled by an administration that has systematically denied people like her the legal right to claim asylum. Despite such obstacles, the resiliency and hope is alive among asylum seekers of the Kino Border Initiative community who organized Friday’s #SaveAsylum event. 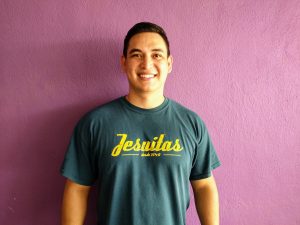 In August, we were joined by Victor Yanez, SJ, a Jesuit in formation from the Jesuits West Province, who is originally from Nayarit, Mexico. He arrived in Nogales directly from the Bronx, New York. There, he was simultaneously pursuing a Masters Degree in Philosophy and an MBA while working at Saint Ignatius School in the Bronx. He is excited to be joining the KBI team as an Office Administrator where he will help manage the human and financial resources of our Mexican non-profit institution in a way that guarantees that the mission of KBI is accomplished. In addition, Victor will work on the Livelihood Project which assists and accompanies migrants in finding employment in Nogales, Sonora. 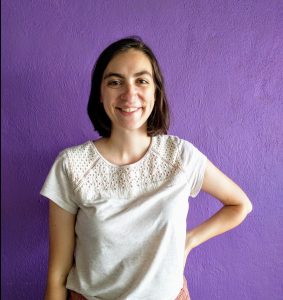 We also welcomed Rosalie Candau who joins us from Cleveland, Ohio where she was working at the Legal Aid Society coordinating the volunteer program and providing assistance to clients seeking pro bono assistance for civil rights issues. She is originally from Austin, Texas. Rosalie is looking forward to working with migrants and volunteers at the Center as she brings several years of experience working with trauma survivors of violence and assault. She completed a Master’s Degree in International Human Rights Law at the Universidad de Alcalá in Madrid, Spain in 2017 and is excited to work with migrants to promote their human rights in a bi-national context.