You are here: Home / Archives for Events

Background: Of the migrants arriving at the Kino Border Initiative (KBI) in 2021 who had been deported, nearly half reported some form of abuse by a U.S. official. Dozens of asylum seekers shared with KBI staff that they approached the port of entry and were turned away without having their asylum claims heard. Migrants have also reported verbal abuse, excessive force, and sexual assault by Border Patrol. Of the 1,667 reported abuses by U.S. authorities in 2021, 94% were committed by Border … END_OF_DOCUMENT_TOKEN_TO_BE_REPLACED 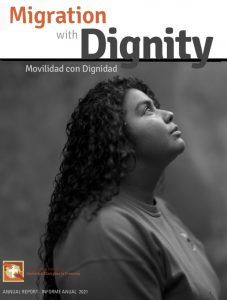 Our 2021 Annual Report is available! Last year was an exciting year at KBI, including an Executive Director transition, the initiation of our strategic planning process, and coordinated efforts build a world where Migration with Dignity is possible. You can click here to view the report. Join us as a volunteer for our next Annual Dinner. You can be instrumental in bringing to life our next Annual Fundraising Dinner on March 11, 2023. Our first planning committee meeting will be held via Zoom. … END_OF_DOCUMENT_TOKEN_TO_BE_REPLACED 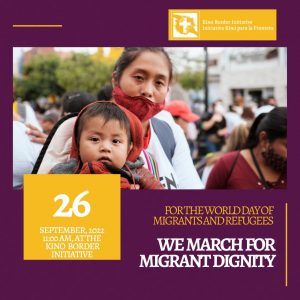 It's hard for to believe that we're still fighting back Title 42 over 2.5 years later. KBI and the Revolucionarios, migrant organizers in Nogales, are grateful to do this work with others in solidarity who continue to elevate messages of welcome in communities across the U.S. The Revolucionarios invite you to commemorate the internationally recognized World Day of Migrants and Refugees with a march entitled, "We March for Migrant Dignity" on September 26. The march will begin with an intro at … END_OF_DOCUMENT_TOKEN_TO_BE_REPLACED 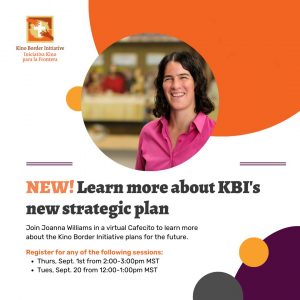 Applications for fall, winter and spring volunteer positions are still open. Kino Border Initiative thrives because of the dedication and solidarity of volunteers from both sides of the border. For more information click here. KBI Hosts Cafecitos with Joanna Williams to Share New Strategic Plan. Our Executive Director will be hosting virtual Cafecitos to share about our new Strategic Plan. Bring your questions, curiosity, and your passion! We are ready to move into this next season as an … END_OF_DOCUMENT_TOKEN_TO_BE_REPLACED