You are here: Home / News / Deaths in the Desert

For migrants attempting to cross the U.S.–Mexico border in the sweltering summer months, a wrong turn or a leaky water bottle can be a death sentence.

In April 2014, an impressive delegation of Catholic clergy—including seven bishops and 17 priests—visited Nogales, Arizona to draw attention to the immigration crisis at the U.S.–Mexico border. While there, they celebrated a Mass at the border fence in commemoration of the many migrants who have died while crossing. Cardinal Seán O’Malley of Boston expressed the sentiment best: “We know that the border is lined with unmarked graves of thousands who have died alone and nameless. We are here today to say they are not forgotten.” In the Tucson sector, those deaths have averaged close to 400 each year in the time the KBI has been in existence (from 2008 until today)—and these are only the ones we know of.

It is a heart-wrenching loss, attributable in large part to the increased militarization of the border and an intermittent fence that diverts migrants through treacherous desert terrain. From 1990 to 2000, the average number of migrant deaths each year was 12, but since 2000, that number has increased to 170 (Pima County Office of the Medical Examiner). Since 1998, more than 6,000 have died along the U.S.–Mexico border (U.S. Border Patrol).
According to a 2013 study by the University of Arizona’s Binational Migration Institute, the main cause of death is exposure, followed by undetermined causes, which likely include instances of exposure. Even with precautions, there are so many ways migrants can find themselves stranded—running out of water, sustaining an incapacitating injury, taking a wrong turn, or being left behind if they are unable to pay a guide who is extorting extra funds from them.

The chart, below, lists annual deaths since 2009. Apprehensions, considered a proxy for the number of crossings, provide an idea of the magnitude of the crisis. Through 2012, the death toll, even when it has decreased in absolute terms, has been an increasing percentage of the number of migrants who make the crossing. Since then, it has declined, but the loss of life continues to be alarming. 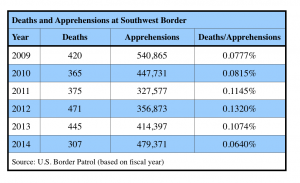 In Tucson, several organizations are working to provide relief on different fronts. No More Deaths/No Más Muertes is a coalition of community and faith groups who, like the KBI, offers direct aid, education and advocacy as well as proposing humane immigration reform based on faith-based principles. The Tucson Samaritans is a grassroots organization taking action to prevent deaths by responding directly to the needs of those crossing the border; their volunteers hike the desert offering water, food and medical care to anyone in need. For the families worried about loved ones who they have not heard from, Coalición de Derechos Humanos and the Colibrí Center for Human Rights work together on the Missing Migrant Project, to help locate migrants who are lost in detention or in the desert, or who may have died while crossing. Colibrí maintains a database of the missing and the unidentified along the border with the goal of providing information to identify the dead; to date, they have more than 2,000 missing persons reports.

Migrant deaths represent an unfathomable human cost of our current immigration system, and it is one that can be addressed, at least partially and in the long term, through conscientious and compassionate immigration laws. The KBI and others continue to advocate for immigration policies that keep families together and offer immigrants the chance to improve their lives, within the law and without fear. In doing so, they assert the value of the human person, the importance of responding to the suffering in our midst, and the basic belief that no one should perish in pursuit of their dreams.