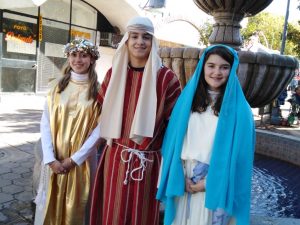 This month, we celebrated our largest-ever binational migrant posada, with over 350 people in attendance. Additionally, Kino Border Initiative joined local and national efforts to resist the expansion of the “Remain in Mexico” policies and to reiterate our collective commitment to offering hospitality to people in migration. Finally, we include details about the upcoming dedication of the new migrant outreach center on February 12th.

1) On Saturday, December 14, over 350 people celebrated the binational migrant posada in Nogales, Sonora. KBI and Dioceses Without Borders coordinated the annual event, which included faith leaders, volunteers, migrants, and local residents. The posada is a reenactment of Joseph and Mary’s struggle to find hospitality as they searched for a place to give birth to their son, Jesus. At the event, the community processed through the streets of Nogales, Sonora with Mary and Joseph and through prayer, song, and testimony recalled how their spiritual and historical example guides us to solidarity with modern-day migrants.

2) Save the date for the dedication of the KBI’s new migrant outreach center! The public dedication will take place on Wednesday, February 12th at noon, and the event will include a blessing of the building, tours, and a fiesta. More details about specific logistics, including suggestions for overnight lodging, will be forthcoming. Follow KBI on social media and look in next month’s newsletter to learn more.

3) Education and Advocacy Director Joanna Williams attended a meeting alongside 31 other U.S.-based migrant shelters who convened in Laredo, Texas from December 6-7. A collective statement against Remain in Mexico was released that highlighted the collective capacity to welcome asylum-seekers at shelters and in communities around the United States. Additionally, the theme of “Unintended Ties”—the subject of this month’s Call to Action—emerged at the meeting.

4) In Southern Arizona, hundreds of people have spoken out against the implementation of the “Migration Protection Protocols” in the region. Alongside a coalition of dozens of partner organizations and over 150 individuals, KBI participated in actions on Monday, November 25 in Tucson to raise awareness about the dangers of Remain in Mexico and to protest its expansion and existence. A follow-up protest occurred on Monday, December 16, with 200 people in attendance, including representatives from multiple community organizations and individuals who had participated in providing hospitality and welcome to asylum-seekers as Tucson-area volunteers.

5) During the month of November, two adult immersion groups joined us from parishes in Washington, D.C., and Seattle. High school groups from Arizona and California came to accompany us on the border, as well.