You are here: Home / Passages Newsletter / “Do this in Memory of Me”: Celebrating Sister Engracia and the many other Missionaries of the Eucharist who have served at KBI

“Kino Border Initiative is especially grateful and indebted to the Missionaries of the Eucharist, for without their vision and service our mission would not have been possible. That is why throughout the months of April and May we celebrated with the sisters their 50 year anniversary of their transformation from a contemplative life monastery (1906) to a new missionary congregation (1972). The sisters live by the motto, “Adorar al Padre en Espíritu y en Verdad.” “Worship the Father in Spirit and in Truth.” And it’s clear that they practice this principle everyday in their various ministries. On May 25th, 2022, the sisters who serve at KBI, Joanna Williams and other collaborators joined the festivities in Colima, Mexico at their order’s mother house. This month’s featured story is dedicated to Missionaries of the Eucharist and honoring their legacy at the Kino Border Initiative.

Encounters at the Margins: Who are the Missionaries of the Eucharist?

So who are we? We are women, who try to make our constant surrender through service. The mission is basically to continue what Jesus came to bring. Continue with that Kingdom, where the excluded have an important part.;”Sister Josefina “Pina” Bejarano, virtual Cafecito presentation, 2022

The congregation from which the Missionaries of the Eucharist was born was founded in 1906. The founding Mother, Maria Magdalena, was an adorer who devoted her life to contemplation. Priest J. Jesús Ursúa brought Mother María de las Mercedes and ten other sisters to Colima to start a Catholic school dedicated to teaching the local children in 1906.  In 1972, with the arrival of the Second Vatican Council, the order began a process of transformation. The Second Vatican Council was the work of many years for the entire Church. There were changes in the organization of the Church, inspired by the Holy Spirit, with the aim of renewing it, making it closer and more conciliatory in the current problems and times.

From Contemplatives to Missionaries (1972-present)

The mission of the Missionaries of the Eucharist states, “The Missionaries of the Eucharist, animated by the Adoring Jesus, are sent to serve and continue the Project of the Kingdom, humanizing, educating and liberating, preferably the poorest in the realities of exclusion.” The Sisters demonstrate this by working in the peripheries and exemplifying what Pope Francis preaches in many homilies, speeches and encyclicals: the love of the poor. They serve at the margins of society such as the elderly (Michoacan), indigenous communities (Oaxaca and Chihuahua) and migrants (Sonora and Jalisco).  Serving the marginalized is their departure point, the lens through which they see the rest of the world. When asked why the Missionaries are here at Kino Border Initiative, Sister Pina responds, “It is by the grace of God, I believe, because our intention is precisely to be in places where they are on the periphery, because here we are trying to respond to the needs and the signs of the times.” The increase in migrant deportation under the Bush administration in the early 2000’s was one of these calls to action for the sisters.

Missionaries of the Eucharist arrival to Nogales (2007-present)

The Missionaries of the Eucharist arrived in Nogales in 2007. Seeing hundreds of men recently deported from the U.S. back to Mexico, Sister Engracia Robles organized a group of volunteers from the local parishes to cook large meals once a month to bring to migrants under the Mariposa bridge. Soon after the operation continued to grow organically. Local companies, bakeries and allies from the U.S. started donating financially and goods to support the emerging migrant ministry. The mission eventually grew into a physical and permanent space, our first comedor. And in 2009, when the Jesuits joined, the Kino Border Initiative was officially born. As Sister Pina says, “After that, in 2009, the Jesuits come and two charisms are united there, to adore the Father and the spirit in truth, to serve. So apparently it was a very good relationship and created the same goal. So with this they started to dream big.”

Celebrating 50 years of living by values

There is never a day where you don’t see the Missionaries of the Eucharist who serve at Kino not smiling and radiating joy. They clearly embody and live by their five guiding values: Joy in Sacrifice, Embodied Prayer, Freedom and Responsibility, Commitment to Justice and Universal Communion. We see these values integrated in the daily attitudes and practices of the Sisters. In the various celebrations leading up to the 50th anniversary, the current Sisters: Pina, Tachita, Engracia and Luz Elena, shared with staff and migrants what those values meant and looked like in practice. Here are the values articulated by the Sisters themselves:

It basically means that everything we do is done with joy and that it becomes a burden, although many times it is a sacrifice. Everything that Jesus did, He did with joy. Without a doubt there were moments where He was upset, but He always gave himself to the service of justice. He had to act…There is joy in what we do. It has always been a pleasure, it has been a pleasure to arrive here and to return home physically tired.  Sometimes with a heart that also hurts from listening to the reality of the people we  serve. We also face mental fatigue, but it is a joyous fatigue. It is a fatigue that we can breathe in and say, ‘thank you Lord’,  because today we were able to give ourselves and we are satisfied. So, the day I no longer smile [doing this work], you will see me out the door. Because everything we do we do it with the heart. The day you don’t see us happy, ask us, ‘Sister, where is your joy?’

Another characteristic is embodied prayer. That means that without the personal encounter with Jesus, we cannot resist every difficult situation, it is an emotional weariness of every day. Only with presence, love and personal presence with God can we renew our spirit and heart. Well, with that hope with God we can face things. 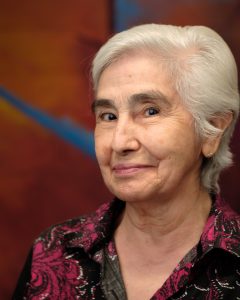 Another characteristic is freedom and responsibility. We are not here because they force us, we are free. Nobody takes care of us at home, we are all adults, and we take care of each other in community. We are free and we are also responsible. Everyone knows what each of their commitments are and what God asks of her…As represented in the scene of the last supper in the mural painted in our comedor, Jesus is there eating with His disciples. He is a symbol.  And the Eucharist was a dinner. And all His friends accepted dinner. His friends who would be His followers. People ask us, ‘How come the Missionaries of the Eucharist don’t go to Mass?’ It is true that we go to Mass very little. But we examine ourselves every day: How do we behave with migrants? With the sisters themselves? With teammates? Yes, because we must live what Jesus said, not so much going to Mass, but doing what Jesus did. That is why we invite the volunteers to eat at our house every week. That is why we commune with migrants on a regular basis. It is a symbol of that mission, that Jesus is at a table, sharing food, which is the most important thing in life, that is why we also want to share this food with the staff and the migrants. To celebrate our commitment and to share that mission. 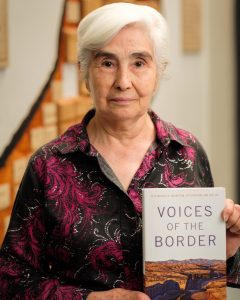 Another characteristic is universal fraternal communion. We are all brothers and sisters. And that is what it means, fraternal fellowship. That we are all called to do. Although we are different, we have Haitian brothers, Mexican brothers, and there are people who come from the United States, it is a way of breaking down the walls. It is a way of building bridges between us. We are capable of changing the world. We are able to build bridges to be brothers with others.

Celebration at Kino Border Initiative, May 19, 2022

As Sister Engracia reminds us, that the original Holy Mass was celebrated as a communal dinner. That is why the scene of the last supper plays prominently in the dining hall of our Migrant Outreach Center in Nogales. In the mural painted by a local artist, he depicted Jesus Christ dining with migrants and paupers. The Sisters decorated the mural with the words, “Hagan Esto en Memoria Mia” which translates to “Do this in memory of me.” This proclamation was the theme of the mass Father Pete Neeley, S.J. offered in honor of the Missionaries of the Eucharist that took place on May 19, 2022.

The sisters invited staff, new and longtime volunteers, and migrants currently housed at the shelter to participate in the mass followed by a specially prepared meal of pozole. The service culminated with the offering of the Eucharist and a blessing given by migrants to the sisters before they departed to Colima. Many migrants thanked the sisters for their generosity, warmth, support and care.

Joanna Williams and other KBI collaborators joined the Sisters in Colima, MX to celebrate their anniversary. The multi-day celebration included speeches, prayer, feasts, and cultural festivities. In a special toast, Professor Ramiro Cisneros, thanked the Sisters for their years of service. He said, “We are going to make a toast to the past, to the present and to the future of the Missionaries of the Eucharist. We will toast to life and the gifts that God gives to each and every one of us. But in a special way for the incarnation and resurrection of God and the Holy Spirit. We will toast because for more than 50 years, a group of brave women gathered by reflection and prayer for the love of Jesus, the Eucharist and the gospel followed to the difficult task of taking a step contemplation to the life of action and pastoral commitment without neglecting the other. We will toast because those same women decided to walk with the indigenous, with the original peoples of Chihuahua, Oaxaca, Veracruz and Michoacán and many other places, also to the borders of this country. They also gave themselves to marginalized neighborhoods, to the poorest… We toast to their 50 years for being missionaries of the Eucharist for their dedication and for their commitment and following in the footsteps of Jesus.”

The Sister’s work exemplifies what Pope Francis calls for us to do, which is to love the poor. For Pope Francis and for the Missionaries of the Eucharist, love for the poor is not a metaphor but a way of living. A sacred commitment. Sister Pina says, “This is prayer incarnate. We worship in spirit and in truth. This means what we pray, we have to bring it to life. We recognize the presence of God in the lives of the poorest among us.”

We thank the countless Sisters, Missionaries of the Eucharist, for being beacons of light, examples of how one should embody the life and love of Christ, and for their commitment to service and justice- all with reigning joy. Thank you Sister Engracia, Sister Cecilia, Sister Alicia, Sister Maribel, Sister Pina, Sister Luz Elena, Sister Tachita, Sister Lorena, Sister Alma Delia, and Sister Rosalba.

The Missionaries of the Eucharist are looking to recruit more sisters. Feel free to learn more about their order here: https://misionerasdelaeucaristia.com/qui%C3%A9nes-somos