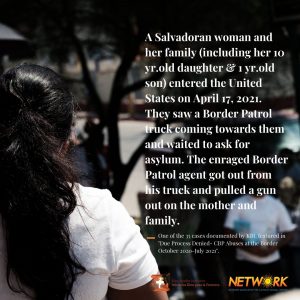 Excerpt: “This joint report by the Kino Border Initiative (KBI) and NETWORK Lobby for Catholic Social Justice, documents patterns of abuse by the Customs and Border Protection (CBP) agency in the Nogales sector. The purpose of this report is to provide a snapshot of what occurs at the border and to press for external oversight to end CBP’s systemic culture of abuse of migrants. As members of Congress continue to push for increased funding for CBP as a response to asylum seekers arriving at the US-Mexico border, and the Biden Administration increasingly relies on CBP to do the work of asylum officers and trained Health and Human Services (HHS) employees, this report demonstrates that CBP is not the appropriate agency to channel migrants due process afforded them by asylum law, and rather is woefully inadequate is such a role.

The 35 cases in this report were documented by KBI from October 2020 to mid-July 2021. All of the immigrants have been interviewed by KBI and unless otherwise stated crossed into the United States between points of entry because points of entry remain closed to asylum seekers. To maintain anonymity, each case is simply titled with the nationality and gender of the migrant.

These complaints against Border Patrol agents show the systemic and inhumane treatment of some of the most vulnerable people who arrive at our southwest border and a complete failure by CBP to follow due process in most cases. By not following due process, CBP and its agents are in turn breaking U.S. and international law.”