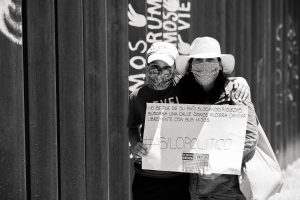 “My dream has always been that my son would have a good place to live, somewhere safe….a park where he could play. It pains me that I can’t take him to the park to play. My son is twelve years old and he does not know what it means to play in a park.”

Elena began reshaping her life several years ago when she and her husband separated. She and her  twelve year old son, Emilio, moved back to Elena’s hometown in Guerrero, Mexico, and after some time looking for employment, she was hired to work in management at a local hotel, a job she grew to love. Things were going well in her position at the hotel, until a new manager arrived and began sexually harassing Elena. She decided to confront him about it, making it clear that she would “not earn her salary through favors.” After this confrontation, Elena learned that her supervisor was well-connected to the mafia that controls her hometown. He began sending men to intimidate and threaten Elena and her son and made it impossible for Elena to continue in her job, leaving her no choice but to resign. After giving up her job, he continued to intimidate Elena, extorting her for money and eventually sending a group of men to break into her home, smashing windows, ransacking the entire house, and stealing items of value. Knowing that she and Emilio weren’t safe in that house, they both went to hide with her sister.

They spent nearly two months with her sister where they continued to live without a sense of security nor liberty. Elena was too scared to find another job outside of the house and leave Emilio alone. Finally, in January of this year, they packed up the few belongings they had and fled North. “When I left, I asked God for two things: wisdom and strength,” says Elena, who has demonstrated immense amounts of both in the way she cares for her son and the resiliency that she radiates each and every day she comes to pick up food for them both. Her journey has not been easy and she still longs for the simplicity of taking her son to a park where it is safe to play.

Elena and Emilio have been in Nogales since mid March. It was during their journey through Mexico that the pandemic became a major threat in the U.S. By the time she and Emilio arrived to the U.S.-Mexico border, asylum was suspended and metering lists were no longer being managed at ports of entry. Although her wait in Nogales is indefinite and unsafe, Elena fears the danger that awaits her in Guerrero even more. She ultimately decided to endure the uncertainty of Nogales and persevere in finding ways for her and Emilio to sustain their wait. This has included turning to KBI. On April 17th she discovered the comedor, a day she remembers with vivid recollection. She encountered a friend on the corner of the street, a single mother herself with two young children, also seeking asylum. This friend led her to KBI, where Elena says “in the face of Pina, in the hands of Alma, in the motherliness of Cecilia, I saw the love of God.”

The Dark before the Dawn

Although Elena worries about the uncertainty of the life that she can provide for Emilio in Nogales, she remains hopeful. Sitting on the steps with her to-go containers in front of the comedor, she says “I have always said this and I won’t stop repeating it: “The darkest moment is right before dawn.” With this inspiration in mind, we hope that there is a dawn ahead for Elena and all the migrants who are currently being denied their right to seek refuge in the U.S. We can’t let this moment become any darker than it already is, and it is precisely for migrants like Elena that we are standing up in the fight to save asylum. She deserves for her dream to become a reality: “This is my dream: that he plays soccer, that he be among friends, that he’s not in danger, that leaving school we can go to the park where I can watch him playing.”