You are here: Home / Migrant Stories / Yanet’s Story: Escaping Honduras and Her Husband

Yanet’s husband began verbally abusing her when she was pregnant with their first daughter, Emily, who is now nine years old. Once Emily was born, the abuse became physical and persisted over the years until just a few months ago when Yanet was finally able to escape and flee to the US-Mexico border to seek protection. For nine years, Yanet was trapped emotionally, physically, and economically under the tight grip of her husband. He threatened to kill her, the children, and Yanet’s mother if she left him. “It was liking being a prisoner in my own home,” she says.

Violence against women is severe in Honduras, and has steadily worsened over the past two decades. For example, from 2005 to 2012, violent deaths of women steadily increased from 175 deaths per year to 606 deaths per year. That is one woman killed every 16 hours. Femicides and cases of domestic violence in Honduras often go uninvestigated and unpunished. Yanet explains that she couldn’t report her husband to authorities. “It felt like a personal problem, to be beaten. But it’s a country-wide problem that no one will stand up for us.” For this reason, she fled to the U.S., a country that has claimed to offer protection for migrant families like Yanet’s.

In 2018, Yanet gave birth to their second child, a son named Gabriel. When he was 18 months old, Yanet and her husband got into a fight which ended with him throwing her down a flight of stairs. She was holding Gabriel when he pushed her, and as she tumbled down the stairs, Gabriel hit his head and suffered a severe seizure. “He was already talking at that point–saying words and putting them together. Ever since that day, all he can say is ‘mama.’” Gabriel, now three years old, looks up at his mother with big, curious eyes. “But, he understands everything,” she clarifies. “He just can’t form words anymore.” Yanet’s husband wouldn’t let her take Gabriel to the doctor following the incident. 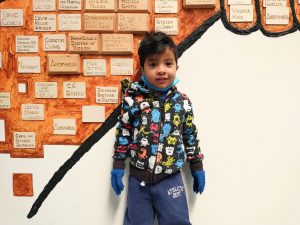 Since that day, Yanet began more seriously considering fleeing with the children, but she was too scared of what her husband was capable of, whether that meant harming or killing her mother or coming after her and the children. She knew she would have to be calculated and patient. At the end of 2020, Yanet’s mother died from a heart attack after having battled with health issues for several years. After her passing, Yanet began plotting her escape. 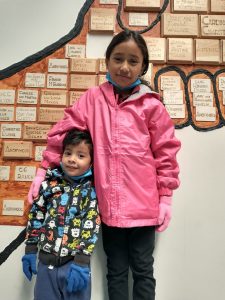 One day, when her husband went off to work, Yanet packed a small backpack with a change of clothes for herself, Emily, and Gabriel and fled Tegucigalpa, Honduras with both children. Together, they traveled north through Guatemala and Mexico to the US-Mexico border to claim asylum with hopes of being released and reunited with Yanet’s brother in the US.

Yanet, Emily, and Gabriel, after days of traveling to safety, finally made it to the Arizona-Mexico border last month. When apprehended by the Border Patrol, she expressed to agents that she and her children were fleeing violence and seeking protection in the US. However, instead of honoring their obligation under US law and international treaties to allow migrants fleeing harm to claim asylum, Yanet–now four months pregnant–Emily, and Gabriel were expelled to Nogales, Sonora under Title 42. The day after their expulsion, they came to the Kino Border Initiative to receive a hot meal, warm showers, a fresh change of clothes, and meet with a legal representative from the Border Action Team.

Unable to return to Honduras and prevented from claiming asylum in the US, Yanet and her two children were returned to a limbo in Nogales, Sonora. For over a year, asylum seekers like Yanet, Emily, and Gabriel have been denied the right to seek asylum and returned to precarity and uncertainty in Nogales. Although Title 42 was implemented during the Trump presidency, by continuing to implement Title 42 at the US-Mexico border, the Biden Administration is solidifying a dangerous reputation that the US is a nation willing to disregard its moral and legal responsibility to asylum seekers.