You are here: Home / Migrant Stories / Esmeralda’s Story: From Fleeing to Activism

Be our spokespersons, stand in solidarity with us, fight with us. We are in this together and we await your help so that they help us and open the borders as quickly as possible.

The persecution of Esmeralda’s family traces back 13 years, when her father-in-law was attacked by a group of men from the community of their small town on the border of Guerrero and Oaxaca. Their family has lived a life of caution ever since, watching Guerrero succumb to delinquency and danger, permitted by a climate of immunity and inaction. “Honestly, there is no future in Guerrero. There is no future because it’s just violence. Violence, death, and killings…That’s all that exists in Guerrero,” says Esmeralda. “For the town, killings are normal, and no one can say anything because the police are involved in everything.” Last year, the threats against her family worsened. Men arrived at her father-in-law’s home to threaten him. A truck pursued Esmeralda and her husband and tried to run them off the side of the road on their motorcycle. Strangers would arrive at their home, throwing rocks and banging on the doors when her children were home alone. Finally, her father-in-law came to speak to Esmeralda to tell her to leave and to take the family with her. 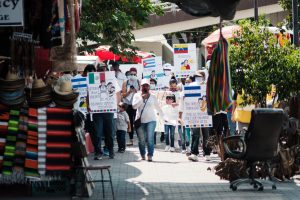 Last November, she and her three youngest children fled Guerrero, leaving behind her husband and oldest son, and arrived in Nogales days later. By the time she arrived, the asylum system had already undergone major changes by implementing metering lists. The US was not screening asylum seekers for persecution, rather it was forcing them to put their names on long lists and wait for their number to be called to present their asylum claims. December passed, 2020 came and Esmeralda and her children continued to wait for their numbers to be called. As the situation worsened in Guerrero, her husband finally fled and joined them in Nogales in January. Months went by, and on March 9th, she found out that her father-in-law had been murdered while harvesting his land. Hearing the news, her family felt a wave of pain rush over them, for the loss of her father-in-law, the wife he left behind, and for what Guerrero had become. After his death, the oldest son, who wanted so badly to make a life for himself in Guerrero decided to join the rest of his family in Nogales as the situation was worsening in their town. 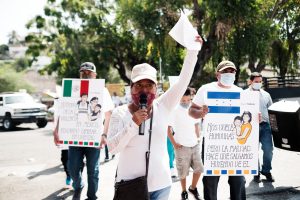 However, their metering number was never called before the borders were closed to essential traffic, and asylum was not considered “essential.” Families like Esmeralda’s, who were already subject to waiting for months and years, now live in Nogales, uncertain of when they will be able to formally begin the asylum process in the US. As the days pass by, many families question for how long they will be able to sustain their wait in Nogales which has no end in sight. However, Esmeralda has been far from inactive and idle. She has become one of the spokespersons for the #SaveAsylum movement, presenting to immersion groups, speaking to reporters, encouraging other migrants of the KBI community to take action in the monthly protests, and even leading parts of last month’s march. “We have been fighting through marches and protests so our voice is heard in the United States,” she says and invites others to be part of the movement with her: “Be our spokespersons, stand in solidarity with us, fight with us. We are in this together and we await your help so that they help us and open the borders as quickly as possible.”