Throughout 2020, there were moments when dark shadows were cast at the U.S.-Mexico border between the implementation of the devastating Remain in Mexico policy in Nogales, record breaking numbers of migrant deaths in the desert, rampant decimation of sacred land for border wall construction, and the onset of a pandemic that would alter the context of the border and our work in unimaginable ways. These moments challenged us to remain steadfast in our faith to seek out sources of light and hope. Pope Francis’ words reminded us that “God is the light that illuminates the darkness, even if it does not dissolve it; and a spark of divine light is within each of us.”

Like many of us, Sister Pina Bejarano Padilla, our Shelter Coordinator, remembers 2020 as “ a difficult year, amid fears, uncertainty, pain, and helplessness” but where God’s presence radiated. “God is still alive,” she says, “and has shown Himself to us here in the margins where we spend our lives in the service of those otherwise neglected.” Our Catholic faith calls us to these margins to accompany the vulnerable and illuminate the darkness with Christ’s light and love. It is precisely this concept that motivates us to be a beacon of light for migrants on their journey, one that is often full of peril, desperation, yearning, and darkness. 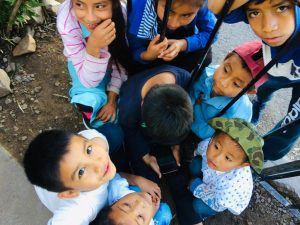 Whereas our faith calls us to be light on their journey, oftentimes it was them who brought light to us. We found hope and restoration in their resiliency, unwavering faith, and immense perseverance. “The people who walked in darkness have seen a great light; those who dwelt in a land of deep darkness, on them light has shone.’ (Isaiah 9:2). The light appeared to us in various ways. Sometimes the light was distant and barely visible, requiring diligence and resiliency to see. In other moments, it was a spark, pushing us to dig deep in our faith and believe that the spark would return, brighter than before. In other moments, the light of God was striking, illuminating the most sincere displays of Christ-like love and providing much-needed rejuvenation.

For our executive director, Father Sean Carroll, his light was simple and constant, found in the face of a migrant who has been coming to the resource center for several months for food and assistance. “My light in 2020 was Julia… She comes with a heart full of love and hope for everyone she meets,” he says as he recalls her spirit. “She encourages me and moves me to continue working and serving.” For Sister Tracey Horan, SP, she stumbled upon light in unexpected moments. “In 2020, I found light in the courage and perseverance of migrants who organized and participated in five public actions to #SaveAsylum. At one point, I found myself tired and imagined that the migrants would want to take a break from organizing. Instead, they showed up more determined than ever to keep working for justice.” 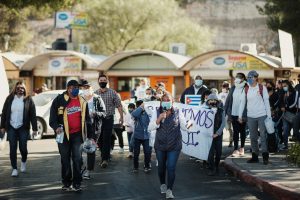 The Remain in Mexico policy was implemented in Nogales in January of 2020, and when KBI received the first migrants returned to Mexico under this policy, a sense of gloom came over us. Just months later, the onset of the pandemic and subsequent halting of the asylum process would force asylum seekers to wait the remainder of 2020 and beyond in Nogales, unsure of when the U.S. would hear their asylum claims. Amid great vulnerability and uncertainty, migrants’ resiliency and activism shone bright, inspiring immigration advocates on both sides of the border all the way to the United States Congress with the support of Senator Sinema, Representative Grijalva, and Representative Kirkpatrick.

Esmeralda, originally from Guerrero, Mexico, spent the entire year of 2020 in Nogales, Sonora waiting and hoping to begin her asylum process in the U.S. In her wait, she became one of the prominent migrant activists in the SaveAsylum campaign, working with Sister Tracey to organize five actions from August to December. Her brightest moment was in the final one of the year. “For me, the most symbolic, most wonderful, most beautiful moment was [on December 2nd] when the representative of the congresswoman appeared with us. For me, at that moment, seeing him present and bringing the statement from the congresswoman, for me, right there, a light of hope shone on me!”

It is precisely the sense of hope and commitment to the movement that inspired our Director of Communications, Sara Ritchie. “My light of 2020 was working alongside migrants in the SaveAsylum movement and having the privilege to project their message. I have been so uplifted by their strength and perseverance in moments where giving up would have been so easy.” While Sara and Sister Tracey, among many, have been moved by the message of the SaveAsylum movement, what has happened behind the scenes has been a true source of light and privilege to witness. “Even brighter to me was seeing the relationships forged in the midst,” says Sister Tracey. “Migrants forming bonds with people from other countries and speaking up for one another. I remember one action during which a Mexican woman spoke through tears about how the Remain in Mexico policy impacts the people she has come to know in Nogales. As a Mexican, she’s not subject to that policy, but it impacted her so deeply because of those relationships.” 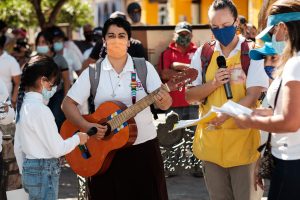 Displays of solidarity and empathy in moments of darkness is incredibly powerful and uplifting. Jaret Ornelas, SJ, our Education Coordinator, says his source of light was “being able to take the time to give people the space to share their stories, sometimes for the first time since they’ve left home over a year ago, and give them an empathetic ear.” For Rosalie Candau, our Volunteer Coordinator, her light derived from examples of unity beyond Nogales. “A star for me in the year 2020 has been the love of all human persons,” she says. “We are in a pandemic where many people have suffered and experienced great pain. I have been amazed by the spirit of the people and how, in countries all over the world, they have worked together with acts of love to improve certain situations [and] support other people who are suffering.”

2020 was a resiliency-building year and taught us to rely on and lift up those around us. “There was physical and emotional fatigue due to the challenges that the situation presented,” says Sister Pina. “However, these challenges also confirmed to me that human beings cannot live alone, that God created us to live in community. My Sisters and our team who give their lives every day, were also a light in my life, a support to continue walking and fighting for our migrant brothers and sisters.” 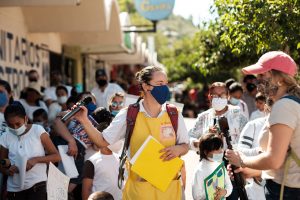 “‘Keep hope, let God surprise you and live with joy.’” In 2020, Sister Pina relied on these motivating words from Pope Francis and refers to them now to project hope for 2021. “In the midst of this dark reality, hope also remains: being able to care for our siblings, taking all necessary measures to make sure that they receive a plate of hot food, a space to shower. Those simple gestures restore their human dignity. I am hopeful that we can walk as a strong team and that the doors of our shelter will open so that they, just like myself, have a place to lay their heads.”

We find joy and renewal in being able to provide humanitarian assistance to migrants, which for some, is something as simple and immediate as a hot meal and shower. Just as our services are coupled by advocacy and education, our hopes extend to those realms as well. “For 2021, my hope is that the migrants who have been working so hard and withstanding difficult and dangerous conditions in Mexico will find justice and finally have their asylum claims heard in the US,” says Tracey.

Sara, who has forged relationships with the SaveAsylum migrant activists, prays that in 2021, their activism will result in concrete changes for them and their families. “I talk and message with the migrants all the time about the protests, to collect quotes and comments, request interviews, and along the way, we have conversations about their families, their lives in Nogales, their hopes. All I want for 2021 is to receive a message from one of them that says, ‘I’m on the other side.’”

Working and living on the border forces us to constantly grapple with the presence of sides and a barrier that attempts to put so much emphasis on “we” and “them.” In doing so, migrants are dehumanized simply for seeking out a better life. At KBI, we strive to restore their dignity. Victor Yanez, SJ, our Director of Migrant Services, envisions a future without sides, without a wall, where we all united as people rather than separated for our nationality. “My hope for 2021 is that the border will become a museum; that the lines, the beams, and the bars that separate the human being from another human being do not exist. That the humanity of the migrant be affirmed.” 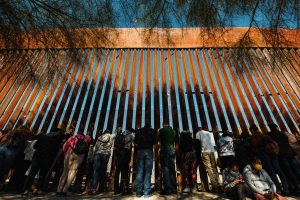 May we move forward with high hopes, higher expectations, and the commitment to our migrant brothers and sisters to make our vision of humane, just, and workable migration between the U.S. and Mexico a reality. We now step into 2021 dedicated to spending the next year working so that migrants may experience that dignity on their journey.