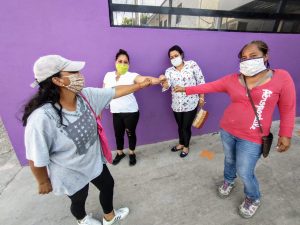 January marked the two year anniversary of the implementation of the Migrant Protection Protocols, which havesubjected over 68,000 asylum seekers to long waits in Mexico as they carry out their asylum claims in the US. Amidst long waits, the asylum seekers forged relationships in Nogales, which are captured in this article.

On Tuesday, January 19th, the #SaveAsylum Coalition, made up of asylum seekers, community members, faith leaders, and immigration advocates from Mexico and the U.S, gathered on both sides of the border wall to call on the Biden-Harris Administration to fulfill the promises they made to asylum seekers during their presidential campaign. 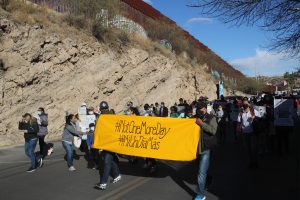 The bodies of 19 migrants, originally from Guatemala, were found in a burned truck in Tamaulipas, Mexico. Such killings reveal a larger humanitarian issue of consistent assaults on the migrant population in Mexico. Due to unsafe migratory conditions, migrants seek and take clandestine and insecure routes, when, in reality, the state should be ensuring their safety and dignity on the journey.

Press Briefing with Migrant Panel to Respond to Executive Orders

Asylum seekers in Nogales, Sonora who have been subject to metering, Migrant Protection Protocols, and Title 42, hosted a press briefing to respond to President Biden’s Executive Orders related to the U.S.-Mexico border. Collectively, they expressed their disappointment as well as their hope that President Biden will follow through on his campaign promises to restore asylum. Our press release echoes those sentiments and condemns the administration’s lack of urgency to process asylum seekers.

How the US Covered Up the Killing of Anastasio Hernández Rojas

In 2010, Anastasio Hernandez Rojas was beaten to death by Border Patrol agents at the San Ysidro port of entry near San Diego. More than ten years later, the key testimonies from three high-ranking Department of Homeland Security officials reveal how the US engaged in the obstruction of justice to cover up Hernandez’s killing. This case is groundbreaking because it is being reviewed by the Inter-American Commission on Human Rights, which specializes in investigating extrajudicial killings. In its 61 year existence, this is the first time the Commission has investigated the United States.