You are here: Home / Migrant Stories / Josefa’s Story: “A light in the middle of the darkness”

Each month, we bring to you the story of a migrant, which typically document the life they left behind, their journey, and hopes for the future. New narratives emerged in 2020 that we have never experienced before as many asylum seekers spent the entire calendar year waiting in Nogales to access the asylum system in the United States. They never imagined spending more than a year in Nogales. Neither did we. However, amidst the uncertainty and inhumanity of these long waits, migrants, too, were able to find light among the darkness. Josefa, an asylum seeker from Venezuela shares about where she found and felt God’s light in 2020.

My name is Josefa Ramirez. I am Venezuelan, and I left my country for being the object of political persecution for the simple fact of thinking and having different opinions about the Maduro regime. I have been in Mexico for over a year and at the Nogales, Sonora border for 12 months. I came to this place looking for protection and political asylum in the United States. I am currently here under the MPP [Remain in Mexico] program, which resulted in a change of plans and physical and emotional side effects, since they assigned me a court date for April [2020] and subjected me to remain in Mexico while I defend my case. However, the arrival of the pandemic made our situation even more complex. The immigration courts closed, causing my case as an immigrant to be paralyzed and be put in a tunnel with no way out. Since that moment, it has been terrible for me and my 10-year-old son who accompanies me on this odyssey. For a bit, I fell into despair because I did not know what to do and felt alone and without protection. Without an immediate response to the situation I am living, I found myself paralyzed on the journey. I cannot move towards my goal since they won’t tend to my asylum claim. I am afraid of staying in Mexico due to being exposed to the risks of violence, and I cannot return to my country because my life is in danger. Days went by and I felt that life was ending–I cried, prayed, got up, and tried to hold onto hope. 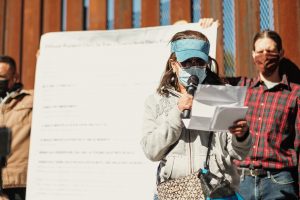 It was in those days when Sister Tracey and Joanna invited us to carry out a march to raise our voices to SaveAsylum and make the authorities aware that migrant families still remain at the border waiting for responses to their asylum claims. I saw that moment as something positive because it was like a hope, or a light in the middle of the darkness in which you find yourself. From that moment, I decided to get involved because it was the way to contribute to a cause that was for our benefit and for other migrant families who are in the same conditions. I got up, dried my tears, and said let’s try it!

Since that first march, many feelings of hope have flourished. First, because I feel like I am not alone and that there are people who support my cause such as the Kino Border Initiative and its collaborators, volunteers, and human rights defenders from the U.S. side. Secondly, because I feel that by working for a just cause, I can change the conditions that keep asylum restricted. During that first march approximately 70 people attended. There was joy, motivation, and sense of community in meeting other migrants who were just like us–waiting for asylum. Seeing other people from other countries who fight with you for the same cause helps lift my spirits. This hope manifested in the faces of the people who were present and we committed ourselves to the next actions. That first march was the window that was opened between the migrants and the citizens who supported this struggle, our brothers and sisters in the U.S. I felt that our voices would be lifted up and heard through them. 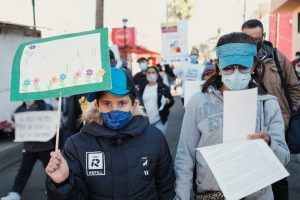 That march was the impetus to participate in all the actions that were to come related to the SaveAsylum campaign. This led to another march, and I managed to motivate other people to also participate in the next actions. My commitment and assistance to each action motivated me more every day and also because my 10-year-old son liked it and that made me happy. I felt that I was doing something to achieve my dreams. Participating in each meeting was gratifying because I contributed ideas and they were taken into account and put into practice. That prompted me to give more of myself and put into practice what I had learned during my professional life, meet other human rights defenders, and see through my commitment to the SaveAsylum campaign. I was challenged and became responsible for each contribution I made. This allowed the sisters and KBI workers like Tracey, Sara, Cecilia, Pina, and young volunteers–all beautiful people with noble hearts–to trust me and encourage me every day. You must be a better person, never lose faith and hope, and fight for what you want. At the end of the campaign it will be very rewarding and one of lots of learning to have participated for a just and noble cause.