KBI recently published a report outlining the many instances of abuse and mistreatment we encountered when working with the migrants we accompanied this past year. Sadly, President Biden has not kept his promises to restore asylum protections and to create a more humane immigration system. Below you will find snapshots taken from our recently published, Congressional Update Year in Review, that illustrate the various forms of injustices migrants face and the reasons why they fled their home towns and countries. 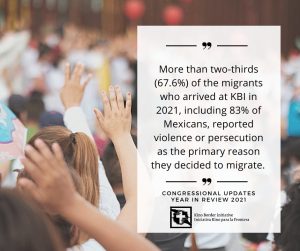 • More than two-thirds (67.6%) of the migrants who arrived at KBI in 2021, including 83% of Mexicans, reported violence or persecution as the primary reason they decided to migrate. The overwhelming majority of these individuals expressed the intention to access the U.S. asylum process when they arrived at the border. The Biden Administration’s continued enforcement of Title 42, however, effectively eliminated this possibility. As a result, they were either forced to wait in Mexico, expelled back to Mexico after attempting an unauthorized crossing, or even returned to dangerous
situations in their hometowns. 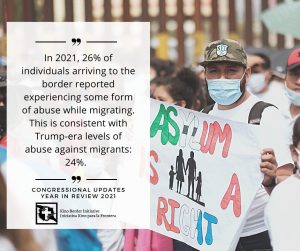 • Of the migrants arriving at KBI in 2021 who had been deported, nearly half reported some form of abuse by a U.S. official. Dozens of asylum seekers shared anecdotally that they approached the port of entry and were turned away without having their asylum claims heard. Migrants also experienced verbal abuse by Border Patrol. 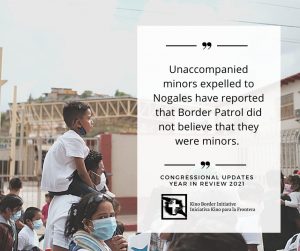 Due Process Violations (excerpt)
• The Florence Project was alerted to a pregnant woman at a local hospital who was in Border Patrol custody. Fearing she would be removed without having her asylum claim considered and concerned about the vulnerability of pregnant women at the border, the organization requested that she be released to the community rather than sent to Mexico. Border Patrol never responded. Two days later the woman reached out from Nogales, Sonora seeking aid.

• Two youths traveling without their parents were returned to Nogales, Sonora under Title 42, despite guidance that they should not be subject to removal. One of these minors was a 17-year-old Guatemalan girl who a Border Patrol agent accused of lying about her age. BP returned her to Mexico at 8PM, and she was forced to stay the night outside, until she found help in the morning.

• Youths traveling on their own to Nogales have reported to us and our partners at the Florence Project that Border Patrol either did not believe they were minors, even in the face of evidence. Border Patrol ignored their identification proving that they are younger than 18 years of age. They also refused to conduct interviews to determine whether they were victims of human trafficking. These minors often reported traveling long days in the desert and issues finding safe housing after they were expelled. 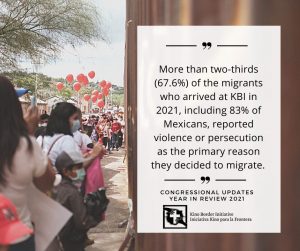 Reasons for Migrating (excerpt)
• Of migrants arriving at KBI during the last two weeks, 59% reported violence or persecution as their primary reason for migrating. This compares to 33% in 2019 and 39% in 2020.

• A young Guatemalan woman arrived in Nogales last week after fleeing domestic violence. Her partner had beaten her and her children. When she left him, he threatened to take away her children and continued to look for her to beat her children. When she crossed into the US to seek asylum, Border Patrol expelled her under Title 42 without giving her access to an asylum process.

• A youth traveling on their own arrived at KBI after being wrongfully removed under Title 42 reported he left Honduras to escape organized crime threats after several members of his family were murdered, including his father and his uncle. 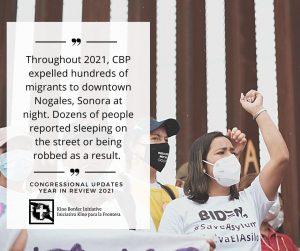 Nighttime Expulsions (excerpt)
• A group of 8 to 10 Guatemalans were returned to Nogales around 1am. The official Mexican reception offices were closed at the time and they had to take temporary shelter in a police office. Only when they spoke to a taxi driver in the morning did they learn about the humanitarian services available to them in the city.

• Another group of Guatemalans were deported  at 10:30pm and were not received by Mexican immigration officials because the offices were closed.

• Border Patrol expelled a group of 43 Central American and Mexican migrants to downtown Nogales at 11PM. One Honduran man in the group shared that BP agents did not give them any directions about where they could go to find shelter, nor were any Mexican officials there to receive them upon arrival. The group dispersed, and he continued walking with 2 other migrants. They asked a man on the street where they could find a shelter, and began walking west. As they approached a cemetery, 5 men came toward them, one with a gun. They men forced them into the cemetery at gunpoint, and told them to take out all their belongings. The Honduran man pleaded to keep his phone so he could communicate with his family. In response, one of the assailants began beating him in the ribs and said he would beat him again if he said another word. The men detained them in the cemetery for an hour before finally letting them go.