You are here: Home / Press / KINO BORDER INITIATIVE TO PRESENT AT 17TH ANNUAL IGNATIAN FAMILY TEACH-IN FOR JUSTICE IN D.C. 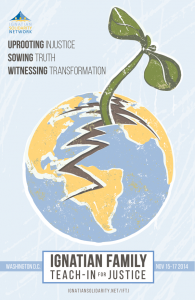 WASHINGTON, DC – Kino Border Initiative will be featured as a breakout presenter at the 17th annual Ignatian Family Teach-In for Justice this weekend in Washington, D.C. The Teach-In is a national gathering of more than 1,300 social justice advocates affiliated with Jesuit universities, high schools, parishes, and the larger Catholic Church. This year’s 17th annual Teach-In will coincide with the 25th anniversary of the murders of six Jesuit priests and two laywomen, killed in El Salvador on November 16, 1989, by Salvadoran military for their defense of the economically poor.

The IFTJ is sponsored by the Ignatian Solidarity Network, a national lay-led, faith-based, social justice organization that works to mobilize Jesuit universities, high schools, parishes, and ministries and the larger church throughout the United States in order to effect positive social change on critical issues facing the world. Teach-In attendees represent over eighty Catholic institutions in twenty-five states, Canada, El Salvador, and Mexico.

This year’s Teach-In includes the national premiere of a documentary depicting the story and legacy of the Jesuit murders in El Salvador. Entitled “Blood in the Backyard,” the approximately 30-minute documentary produced by Loyola Productions includes interviews with Rep. Jim McGovern, former U.S. Ambassador to El Salvador William Walker, and Fr. Jon Sobrino, S.J. The documentary will be shown on Saturday (11/15) evening and will be followed by a communal prayer service commemorating the lives of the murdered Jesuits and their lay companions.

In addition to the workshops, keynote addresses, and policy discussions, participants will rally on Capitol Hill on Monday, November 17, before collectively meeting with over 125 U.S. Congressional offices. Advocates will visit with their respective lawmakers to urge Congress members to pass humane comprehensive immigration reform, support human rights oriented policies in Central America, and respond to climate change and effects marginalizing the economically poor.

“Not only will the Teach-In participants commemorate the lives of the murdered Jesuits, they will put the martyrs’ legacy into action by advocating on Capitol Hill for key issues facing people across the world today,” said Christopher Kerr, executive director of the Ignatian Solidarity Network. Kerr continued, “This is a critical time for faith-based advocates to be calling on our country’s leaders to act morally on important issues like immigration reform, climate change, and human rights in Central America.”

The Ignatian Solidarity Network (ISN) is a national social justice network inspired by the spirituality of St. Ignatius of Loyola. ISN was founded in 2004 and is a lay-led organization working in partnership with Jesuit universities, high schools, and parishes, along with many other Catholic institutions and social justice partners. More information can be found at: www.ignatiansolidarity.net.