Volunteer opportunities, education and advocacy immersion trips, and public actions are all chances of encounter for people to gain awareness, accompany and to stand in solidarity with migrants at the border.  For many, these experiences are transformative. Individuals go back to their communities to not only shed light on the issue but to actively work on seeking justice. Alma’s “Bolsas de dignidad” or “Dignity Bags” is one example of this.

When Alma Schlor met a migrant woman named Dominga close to ten years ago she never imagined that her life would change forever. Alma, who is originally from Mexico and moved to Tucson, AZ fourteen years ago, started volunteering with Kino Border Initiative at our old comedor. She was oftentimes tasked with distributing fresh clothes and toiletries to migrants who had been recently deported from the U.S. back to Nogales, MX. Dominga was an indigenous Guatemalan woman who was recently expelled from the U.S. after being held in a detention center in Arizona for a few days. When she arrived at our comedor, she was in bad shape. 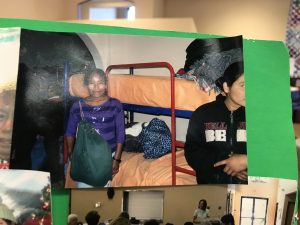 Withdrawn, listless, confused, and in desperate need of medical attention; Dominga had severe blisters on her feet from trekking through the Sonoran desert during the summer monsoon season. The friction from walking for long stretches of distance in wet shoes caused the painful abscesses and ultimately, she could not continue her journey. Her group left her behind in the desert where Customs and Border Patrol agents found and apprehended her. While in immigration custody, she was not seen nor treated by doctors. These blisters soon became infected.

Alma observed as one of the Missionary Sisters carefully removed the battered sneaker shoes that Dominga donned. Dominga grimacing and fighting back tears, squirmed as the shoes are removed only to reveal that the blisters had ruptured and the soles of her feet were burning raw flesh. The sister gently washed the wounds and treated the infection. This image reminded Alma of Jesus washing the feet of his disciples, a profound lesson in serving others.

As Dominga sat in a corner, with her bandaged feet, Alma asked for her clothing and shoe sizes. Dominga shrugged and inaudibly responded by looking down at her feet and then to the plastic bag given to inmates with their belongings when released from detention. A petite woman, Alma guessed her sizes and came back with clothes in a grocery bag to deliver to Dominga. She shook her head. In broken Spanish, as this was not her native language, she said “no”. She’d preferred to carry the clothes in hand than to accept another plastic bag. These plastic bags, that closely resemble garbage bags, are representative of how inmates are treated, like garbage. The plastic bag was dehumanizing.

This exchange inspired Alma to design and handcraft a backpack for migrants. She went back to her parish, Corpus Christi in Tucson, AZ, and founded a small ministry called “Bolsas de dignidad” or “Dignity bags” with fellow allies. The bags these women make are vibrant, drawstring bags with a hand drawn image of Our Lady of the Guadalupe’s face sewn onto the back. Alma says, “The image of Mary is very important. Because having Mary on a backpack that sits on your back means that she is protecting you. She is guiding you. And that is the symbolism that we use, Mary. Our Lady of Guadalupe, who protects migrants.” 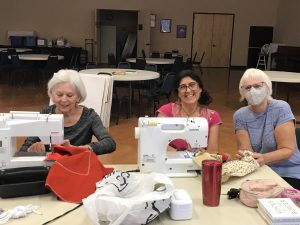 Kino Border Initiative’s work builds from the attentiveness to migrant voices and experiences, which is how “Bolsas de Dignidad” started. We believe that dignity is inherent and God-given. This means our work isn’t to give dignity, but to respond in a way that people can own their dignity. Dominga asserted her dignity and agency by refusing another dehumanizing plastic bag; and in the same way, Alma, responded by offering a humanizing alternative- we engage in this reciprocal exchange and learn how to respectfully accompany migrants in their journey.

These values and ethics are evident in our Education and Advocacy efforts and collaborations with other partners. Students in immersion trips are asked to reflect on their experiences accompanying migrants during their time at Kino, and then encouraged to take action. One student shared their reflection with us from their summer trip. They said, “this past week was a whirlwind (I mean that in a positive way) […] This trip has given me a beautiful gift of knowledge. I hope to use that new information to better this situation, in small and big ways as a student and one day a working professional. The trip also gave a new perspective on my Catholic faith, and a greater sense of gratefulness.”

Some examples of the ways students use “this new information to better the situation” include tabling on campus to promote awareness like Bellermine Prep did this past year; or like students from Gonzaga Prep, Holy Trinity Parish, Georgetown University and others joined advocates and migrants to protest against Title 42 in front of the White House on September 21st. These are just a few of many extraordinary works of KBI partners, like Alma and Corpus Christi, that display solidarity in action. This solidarity and presence is needed now more than ever as asylum is still being denied to migrants in need. 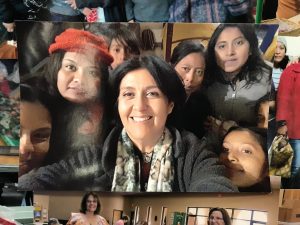 For Alma, our U.S. policies are unjust and inhumane. She says, “I see [in today’s politics] a lack of compassion. A lot of insensitivity. If you see the suffering of somebody, then you want to help right away. That is your natural instinct, it’s to help. We need laws to be compassionate. Both in the US and Mexico. In Mexico there is a lot of corruption. There is a lack of compassion towards others. Poverty is very bad in Mexico and in South America. The governments are bad. They [migrants] would be happy to stay. I know people from Honduras that say it’s beautiful. They say, ‘if I could stay here I would because I love my country. But I had to leave. I don’t have a choice.’ I think the governments on both sides should have more humane laws. The main thing is compassion and empathy.”

These are challenging times for so many. Your generosity in support of our migrant neighbors has never been needed more. We are truly grateful that you share our values of compassion, human dignity, and social justice. Like you, the KBI is committed to more just and humane treatment of our migrant brothers and sisters.

And until meaningful policy change is made, KBI staff and volunteers ensure that there is a safe place in Nogales, Sonora, on the U.S./Mexico border, where migrants can find shelter, a hot meal, a warm shower, clean set of clothes and other critical resources. Perhaps more importantly however, they will also find compassion and renewed hope for their future. Your decision to listen to migrants and walk alongside them through donating, organizing, volunteering, and advocating makes this work possible. We are so grateful for the generosity of people like Alma and you that has enabled the KBI to be a continuous and credible presence on the U.S./Mexico border for the past 12 years. Together, we have changed lives on both sides of the border. 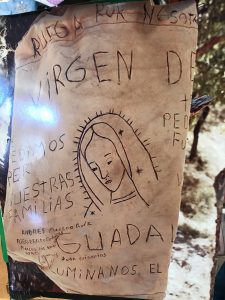 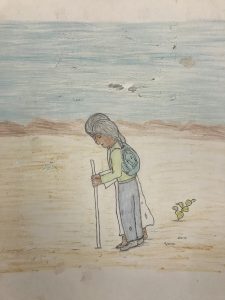