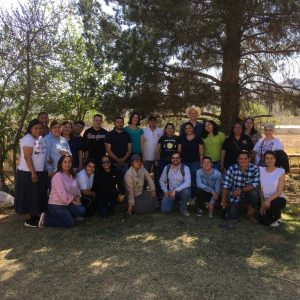 On April 8th, KBI had our staff retreat that is so integral for renewing our camaraderie and support for one another. KBI has worked tremendously hard to build a team that can meet the dynamic needs of the migrant community everyday and to meet those needs with grace and compassion. Gatherings like this retreat put all of our collective work into perspective and rejuvenate our team’s dedication to the causes so dear to us all. 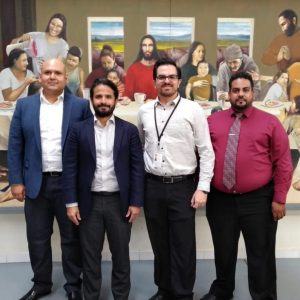 During the first week of April, KBI’s Director of Education and Advocacy, Pedro De Velasco, met with the newly appointed Consul General of Mexico in Nogales, Marcos Moreno Baez, who, soon to take office, recognizes the importance of collaboration between the federal, state and local governments with organizations that provide humanitarian assistance, such as Kino. At the same time, he committed to ensure the defense of the human rights and dignity of migrants, on both sides of the border. 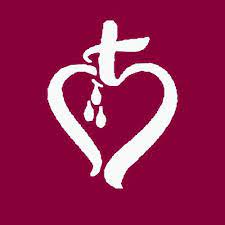 We welcomed Sister Dani Brought from the Adorers of the Blood of Christ from St. Louis, MO throughout the months of March and April. With the support of the Hilton Foundation and the project Catholic Sisters Walking with Immigrants, Sister Dani is learning best practices from the Kino Border Initiative’s Education and Advocacy teams to take back to her congregation. Please spread the word with Catholic sisters in your network regarding this unique opportunity to serve and learn and KBI. Contact volunteer@kinoborderinitiative.org for questions and to sign up.

Migrants marched on the second anniversary of Title 42, calling for its termination 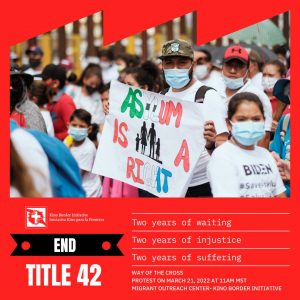 On Monday, March 21st, on the two-year anniversary of Title 42, hundreds of migrant families in Nogales reenacted the Via Crucis, or Stations of the Cross, to symbolize their suffering under the racist and inhumane policy.  Asylum seekers, advocates and allies processed from the Kino Border Initiative- Migrant Outreach Center along the U.S.-Mexico border wall until reaching the DeConcini Port of Entry, all while carrying a 9-ft. cross signed by dozens of migrants. 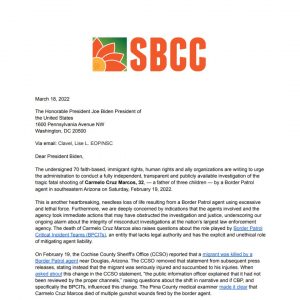 The Kino Border Initiative was one of the 70 organizations who sent a letter to the Biden Administration to urge them to conduct an investigation of the fatal shooting of Carmelo Cruz Marcos, 32, and father of three children, by a Border Patrol agent in Arizona back in February. Read the Southern Border Communities Coalition letter here. 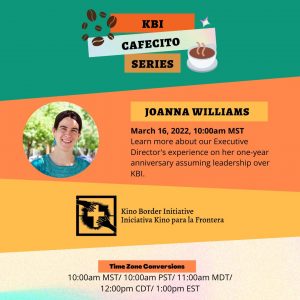 KBI’s Cafecito Series- Joanna Williams’ rang in her one-year anniversary as Executive Director by hosting our first virtual meet and greet of the Cafecito series. Join us for the second Cafecito edition on May 9th for Josefina “Pina” Bejarano’s talk on the 50th anniversary of the Missionary Sisters of the Eucharist and learn more about the evolution of our migrant shelter over the years. Register here: https://bit.ly/34Y1l5T 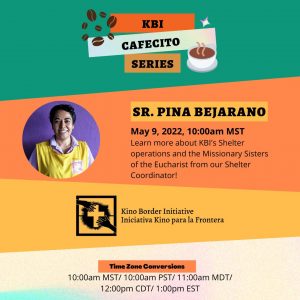