You are here: Home / Announcements / Migrant Story: Ana Carolina (excerpt from “Voices of the Border”) 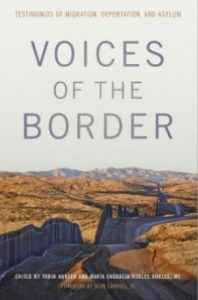 Excerpt from “Voices of the Border” edited by Tobin Hansen and Maria Engracia Robles Robles, ME

I’m Ana Carolina, from Guatemala City. I’m thirty-nine. I only finished sixth grade. At age fifteen I moved in with a guy, and I had seven kids: three boys, four girls. Except for the ones who have been murdered, it’s the same kids I have with me here. My oldest daughter is twenty and the youngest is twelve. There are three girls who are under eighteen. One of them got kidnapped once. There’s also my little boy, the twelve-year-old. The other two boys, when they were grown, they were murdered.

The father of my kids has been really decent, but four months after I had my youngest, he left home for the first time. Because before that, he paid the bills. He disappeared for two months, and told me he had tried to get across to the United States. I forgave him, but he stayed for fifteen days and disappeared again. I spent five years waiting for him. I went to work in an assembly plant. I met people there, started to feel comfortable. Seven years I waited for him, but I got tired of waiting and found myself my current man I came here with. My husband did come back, but this time I didn’t take him back.

When I moved in with this man I love now, we opened a Mexican-goods store. We got through the first month of work, and then the extortion started. The people from the gang wanted us to pay rent: four hundred dollars a week. So I filed a complaint, put my trust in God, and on September the fourteenth, 2008, they killed my oldest boy. He was coming home from work. He was eighteen, and they killed him like a criminal and he was a good boy. They killed him with a high-caliber gun and left him unrecognizable. I went crazy. I spent two months out of it. My husband helped me by taking me to see doctors, because I was a mess. The day it happened, I chose to go to the crime scene. When I saw my boy, I couldn’t walk. I lost my voice, I froze. No one was held responsible.

The day after burying my son, we had to get out of the place where we were living because they threatened to get rid of us all. My son, the second oldest after him, he left school because we couldn’t afford it anymore. We headed to Paraiso del Frutal with nothing. Brayan- that was his name- he wanted to be in the motorcycle-taxi business, and he got started, he was taking passengers all over the place. Everything was moving along. But still I was constantly afraid. We had been there just about one year and then one day my son says, “I saw a car. Like it was following me.” I started telling him not to go to work, but things weren’t easy. This time, what happened to my son was that he was kidnapped. It was the man from the car he had told me about. They pulled him off his motorcycle taxi and took him away. The police called me. I held out hope of getting him back. The next day my boy was dead with his hands tied together.

I was a mess all over again. I stayed home all the time. The strength had gone out of me. I said, “If they kill me, let them kill me, I’m not going to run.” But then they kidnapped my daughter Isaura. She went to buy bread. The woman from the bakery showed up and told me they had made her get in a car. I went to the police, filed a report. The next day we get a phone call: “We want four thousand dollars.” My girl was being tortured. For two and a half months they tortured her. She was about to turn fifteen. They kept her blindfolded. And they said terrible things to her like, “If that bitch of a mother you have doesn’t pay, we’re going to cut you into little pieces, just like we killed your brothers.” We sold a car, way underpriced in order to pay the ransom for my daughter, and we got her out.

In 2013 I decided to get my daughter out of there. I got the whole daily together and took them all the way to the mountains. They stayed there, and I left with my husband for the US. We crossed near here, at Nogales. They caught us in the desert, me and my husband. I was taken to Tucson. I was told they were going to keep me in custody for six months. I signed my deportation.The next day I was taken to Eloy. I met someone who was from Nogales there. I was crying a lot about my girls. I told her everything and she helped me request asylum. I was able to get the interview. I told them my case. I said, “I don’t have any support, or any money.” I asked to be deported and they advised me not to do it. A lady helped me, and in three days I was out of jail. They took me to stay at their house, these ladies- they supported me; they took up a collection for me and sent money to my family. They got me a job; they paid me my first week, and my girls were happy. But then, my girls sent me a message that two threat letters had arrived. I went nuts, and I wanted to leave. I couldn’t stay any longer. Someone gave me some money and I left. I stayed at the Mexico-Guatemala border and a relative went to bring my daughters. My youngest son, Alan, had gotten hit by a car. So they brought my daughters to the border. We were in Hidalgo, Chiapas. We got deported to Guatemala three times from there. In Tapachula we spent seven months there. They gave us support there and fixed a permit for us.

In all, we’ve been in Mexico for a year and a half so far, suffering. Some of the time in the jails in Tapachula, some of it working or on the road. Sometimes without a nickel in our pocket. I used to cry and say, “What are my little guys going to eat?” Right now, we’re here, to ask for asylum in the US again.