You are here: Home / News / The Missing Students in Mexico

The disappearance of 43 students, apprehended by police while peacefully organizing an “action” in the small Guerrero city of Iguala last month, sent shock waves throughout the world, and heightened the pervasive feelings of both fear and outrage in Mexico. Though a federal investigation is under way to determine what has happened to these young people, who were studying to be teachers in rural schools, the likelihood is that they met a violent end at the hands of narco-traffickers as law enforcement and local leaders looked the other way. In fact, Iguala’s mayor and wife are suspected of ordering the abduction and are now fugitives. According to Father Alejandro Solalinde, the country’s most outspoken defender of human rights and the keynote speaker at the KBI’s 5th anniversary forum, a recently found mass grave may indeed contain the students’ remains despite government reports to the contrary. 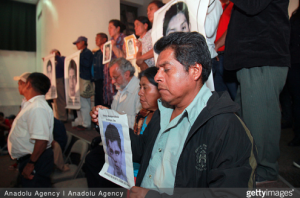 This rampant corruption, collusion of criminals and politicians, and state-sanctioned murder are among the reasons so many have fled Mexico, crossing the border any way they can. This week, marches are being organized in Mexico City and throughout the country as citizens demand justice and an end to the violence and corruption.

Francisco Goldman chronicles what we know so far in this New Yorker article from October 24: http://www.newyorker.com/news/news-desk/crisis-mexico-disappearance-forty-three