On October 21st, a resilient and dedicated group of migrants and asylum seekers from KBI gathered in downtown Nogales, Sonora to accompany childrenwho led the Children Seeking Asylum March. With steel beams of the border wall towering above, 10-year-old Fanny, 8-year-old Ronald, 15-year-old Anyeli, and 16-year-old Monse from Mexico, Venezuela, Honduras, and Mexico respectively courageously shared personal stories, statements, and pleas to one day have the opportunity to seek refuge in the United States. The Trump Administration has issued eight new rules limiting asylum seekers’ access to protection just this year, and another rule is now in process that would greatly impact the fate of many children like Fanny, Ronald, Anyeli, and Monse and all those who are in Nogales and along the U.S.-Mexico border. 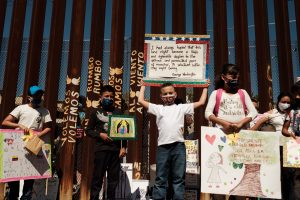