Migrants are being rapidly expelled by the hundreds on a weekly basis to the small town of Sásabe, Sonora just west of Nogales. These are notjustMexican nationals, but migrants from Guatemala, Honduras, and El Salvador as well. They are left in this town with no idea of where they are and a lack of infrastructure and resources for discerning next steps. A Tucson-based organizer, Dora Rodriguez says: “We believe that Border Patrol is getting away with these horrible deportation numbers because no one knows. It is really easy for them to just dump people there and that’s it. Nobody says anything.”

The US Constitution says that a census should be conducted every 10 years in which the “whole number of persons in each State” is counted to determine: 1) the number of seats in Congress, and 2) the allocation of funds. The Constitution does not state that only US citizens are to be counted. The Supreme Court will decide on November 30th if Trump has a right to exclude undocumented immigrants from the Census, a decision that will could result in immense underfunding in undocumented communities. 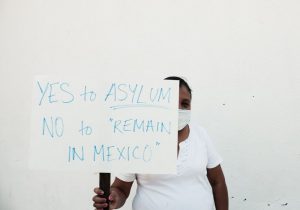 The ‘Remain in Mexico’ policy has forced more than 60,000 asylum seekers to await their asylum hearings from Mexico and has already been struck down by lower courts that stated that the policy violated federal and international law and was causing “extreme and irreversible harm.” The Supreme Court will review the legality of ‘Remain in Mexico’ following the election along with President Trump’s border wall construction.

According to the Pima County Medical Examiner’s statistics, the number of deaths in the Arizona-Mexico desert is expected to be more than 200 this year, the highest count in the past decade. It pains us to hear of such desperation to know that these policies are designed to create such tragedy.