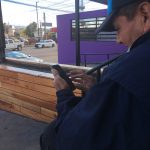 Oscar raised his family in the United States. In 2004, following a difficult divorce, he returned to his home country of Honduras. By this year, the threats against his life had become so serious that he had to flee. He has been waiting in Nogales for several months and looks forward to seeing his children once again.

Oscar is a 69-year-old man from Honduras who has been at the comedor since early this fall. His entire surviving family—nine adult children who live in five U.S. states, their spouses, and 16 grandchildren—are pooling their resources to help him pay for a lawyer and legal fees. While Oscar goes through this process, he is living in Nogales, Sonora, and often comes to the Comedor both for meals and to help out with cleaning.

From 1989-2004, Oscar lived in the United States—eight years in Los Angeles, and nearly eight in New York. He worked in construction and raised his family there (eight of his children are now residents and one is a U.S. citizen), saving money to build a comfortable house for his large family. In 1998, Oscar qualified for Temporary Protected Status after Hurricane Mitch; he was able to regularize his status after that. His children are currently working with a lawyer to determine how this might affect his legal status in the U.S. at the present time.

In 2004, Oscar and his wife divorced. Oscar felt profoundly ashamed that he wasn’t able to make his marriage work, and his children were upset with him. Given the weight of his shame, Oscar returned to Honduras and for several years, his children refused to speak with him for what they then saw as breaking apart of their family. During these years, Oscar was rebuilding his life in Honduras and worked in construction after his return. In 2004, Oscar said, he returned to a country that was still “beautiful, and Honduras was a place of relative peace, happiness, and harmony.” However, in Oscar’s experience, that all came to an end in 2009, with the coup that ousted then-president Manuel Zelaya amidst much international condemnation, including that of the United Nations.. Notably, however, the U.S. did not speak out against Zelaya’s removal, nor did the U.S. advocate reinstating him in office, Oscar said that the coup changed Honduras, and at that point all order broke, and “total chaos” descended.

However, Oscar still had his construction business and he was beginning to repair his relationships with some of his children. They began to talk on the phone, and Oscar said that time helped heal some wounds, as well as his children growing into adulthood and understanding that “love can be complicated.” Also, Oscar was rethinking what it meant to be a father. When he was younger, he said that he believed being a good father meant being stern, authoritative, and angry. As he grew older, he came to see that he wanted to act differently as a father and a grandfather—to be a friend to his children, to treat them with love and support, and to constantly search for ways to communicate and connect with them.

During this time, Oscar was growing too old to do construction work, and so he became a businessman. He took on two fruit stands as well as a tortilla stand, but the criminal mafia began to demand a quota from him. He made about 1500 lempiras ($100 US) a week at these stands, and the gangs demanded a quarter of that. Oscar noticed that someone was always watching him, taking note of his payment and his movements, and it was clear that the gangs were serious about their threats to harm him if he did not pay. When someone could not pay, the criminal gangs first sent a warning note, saying that the nonpayment risked the person’s family, and if payment was still not procured, then death resulted. Oscar cannot count how many times he saw people killed for this reason.

Oscar was becoming increasingly anxious, and so compiled the notes that the gangs had sent him demanding the quota—dozens over the course of a year—and took them to the police station. The police took one look at them, said they didn’t mean anything, and ripped up the evidence. At this point, Oscar realized it was time to leave Honduras—he could no longer work in peace and lived in constant fear of death.

And so, at the age of 68, he migrated once again from Honduras to the U.S./Mexico border. He is now back in touch with all of his nine children—in early December, he reconciled with the final two who had not spoken with him in fifteen years—and he said it is a “marvelous feeling” to be speaking again with all of his children.

Oscar will be alone this Christmas, though he expects he will speak with all of his kids and his grandkids on the holiday. He plans to spend the day at the Comedor. He likes that there he can grow spiritually, and he says one of the things that the Comedor has helped him realize is that “the time of material abundance has changed. Our world worships resources and wealth, and we need to worship God and justice for the world situation to change.” And he delights in each of his kids, seeing who they’ve become, and watching them understand that his love for them “is eternal—it’s deep inside me and I think they are coming to know this.” If he is able to go to the U.S., he plans to live with his oldest son, Antonio, in North Carolina. There, Antonio has a construction company of his own. It is a trade he learned from Oscar, and Antonio wants his father to help guide his business going forward.