You are here: Home / Migrant Stories / Suyapa’s Story: “To the Biden Administration: I want you to take us seriously, especially us women.” 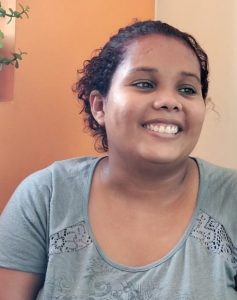 Suyapa [not real name] is one of the migrant organizers part of the #SaveAsylum movement. Read her full testimony that she shared during the press conference to commemorate the 70th anniversary of the UN Convention on the Status of Refugees.

My name is Suyapa and I’m currently in Nogales, Sonora with my son, and I am fleeing from Honduras. I do not want to return.

Life in Honduras is very difficult, complicated, dangerous, and there is a lot of abuse. In my case, I’ve had to face people who have attempted to kill my children and me.

In my case, I’ve had to live through several of these abuses. I attempted to report one of the abuses I suffered to the police. My abuser was put in prison, but after a time, was released and began threatening us again, saying he’d kill me and my children because I’d reported him.

Upon leaving my country, I entered Guatemala where I found a lot of extortion from the Guatemalan police. Every patrol detained us and demanded money, and if we didn’t give them money, they threatened to return us to our country if we didn’t pay what they demanded of us. But thank God in Jesus, we were able to cross into Mexico.

We spent a lot of time in the train and walking in order to arrive here. Being in Mexico, we found a very difficult path because we didn’t have the economic means. I had to sleep along the railroads in the state of Tabasco.

I had to walk several days along the railroads until I found another state where I decided to ride on the train because I couldn’t walk anymore. We traveled on that train until we arrived in Mexico City, where I watched people jump off the train in fear of being caught by Mexican immigration and be hurt because of that. I, in fear, hid in holes in the train and told my son not to make noise.

On the road, people encouraged me to rest with my son in migrant shelters, and I waited there for another train to come by. We followed that path for several days and nights.

We did that until we arrived in the place where we could cross in the desert, where we found people who said they were coyotes, who charged us a lot of money and told us we’d be in the U.S. in 3 days. But those 3 days became 8 days.

And when we were already about to arrive at our destination, Border Patrol picked us up. After that, we attempted crossing two more times, making a total of three times. The first time, I asked for asylum from a Border Patrol agent. They told me no, that there was no asylum, that it was a waste of time.

Everything they said was very negative. They didn’t even believe that my son was mine. They said they’d test our blood to prove it. After the was they responded to us the first time, I said I didn’t want to ask again.

To the Biden Administration: I want you to take us seriously, especially us women. We have endured a lot of things on the way here: hunger, cold, drinking water from puddles, injured feat, knowing that out children also run the risk of abuse or illness.

One arrives with a lot of fear on account of the rumors, that people are kidnapped here. We almost don’t go outside at all because of that fear. We need that you stop removing people to Mexico under Title 42, that the migrants seeking asylum no longer need to wait in order to access their rights.

We need support and we need you to listen to us. The only thing that we want is a better life for our children, and to see how we can keep moving forward in safety.

We need your help: