You are here: Home / News / Up Close: The People of the KBI * Marla Conrad 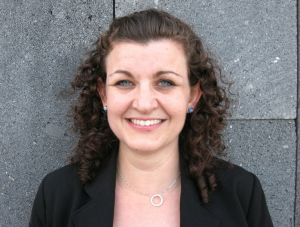 The life-altering moment occurred on a trip to Morocco in 2000. Looking back, it was little more than a commotion when three teenage boys were discovered underneath a bus bound for Spain, tied by their shoelaces and hoping to cross the border without incident. As Marla Conrad, a passenger on that bus, reflects, “I did not completely understand what I was witnessing at that time, but it was my first look at the inequalities that exist when some people are allowed to cross international boundaries and others are not.” The experience set her on a larger journey, one that eventually led to her work at the Kino Border Initiative.

After a two-year stint in Honduras with the Peace Corps, leading and organizing youth programs, Marla returned to her hometown of Phoenix in 2005, and spent the next five years as a case manager for Catholic Charities, working with unaccompanied children and immigrant families, helping them reunite, regularize their status, and integrate into the U.S. “I listened to their stories of difficult border crossings and their struggles to live in Arizona, a state where anti-immigrant policies have been the focus of much national attention,” says Marla.

Listening is such an important part of working with displaced people, and it is a skill and sensitivity Marla relied on extensively as she did research for her Masters Degree in Social Justice and Human Rights at Arizona State University (May 2013). Her thesis subject was violence against migrant women, and she collected valuable data and stories—testimonios—as a KBI intern, sponsored by Catholic Charities, in 2011 and 2012. Her responsibilities also included providing advocacy and accompaniment to the deported migrants the KBI serves. When a full-time position as the KBI’s advocate/volunteer coordinator arose in January 2013, she jumped at the chance.

While some parts of the job are fairly consistent, like surveying the migrants or facilitating research projects with other organizations, every day is different, depending on the migrants and their needs. So Marla may find herself fielding questions, helping someone get a social security card, acting as advocate/interpreter between families and state offices, or helping people figure out their plans and decisions in a calm, safe place.

It’s a juggling act, but one she is grateful for. “Working here has transformed me on every level,” Marla admits. “I’ve learned so much from the migrants and the KBI staff,. About being part of a community, most especially. Every day, we work and struggle together, poco a poco, to help build the kind of world we want to live in.”