You are here: Home / Migrant Stories / Yolani’s Story: Living Under the ‘Remain in Mexico’ Policy 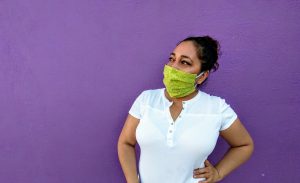 “We don’t leave our countries to make ourselves rich in another, nor be a burden. We come simply to live, to save our lives, and give a better life to our children. I ask that the people in the US help us, we’re asking for help. Don’t leave us here under MPP [‘Remain in Mexico’], which is like leaving us to our predators.”

Yolani is originally from San Pedro Sula, Honduras, known as one of the most dangerous cities in the world, where she and her family could not evade the violence that plagues the country. In 2018, gangs arrived at her home, attempting to kidnap her oldest daughter, Natalia, but they were able to fend off the intruders with the help of neighbors who were witnessing the event. Yolani’s husband, Nestor, reported the incident, but in doing so, it was as if he was turning himself over to the gangs because the police are directly involved in and control a majority of the organized crime throughout the city. As a result, the gangs arrived at their home where Nestor was beaten.

Evaluating the imminent danger that Natalia faced, both she and Nestor fled from Honduras to the United States, where they resettled in Texas, the family separated for more than 2 years. Even after Nestor and Natalia fled in 2018, the gangs continued to come knocking at Yolani’s door, threatening her and her 14-year-old daughter, Yovely. They demanded to know where her husband and older daughter were, but Yolani pretended that she didn’t know anything. One particular evening, the gangs came to her home and sexually assaulted Yovely. In a moment of pure anger and reaction, Yolani’s brother stepped in to stop the aggressor, pushing and punching him. Days later, Yolani’s brother was found dead.

The men continued to come to Yolani’s house, threatening to come after them next, so she and Yovely fled San Pedro Sula as well to reunite with Nestor and Natalia in Texas. “Honduras is beautiful but good people are few and far between,” Yolani says. “We fight to improve our country, our families, but the crime is terrible….extorsion, violence, robbery… Honduras is beautiful, but it has ugliness. There is no future for our children.”

Yolani and Yovely arrived in Sonora in January of 2019 where they crossed through the desert and approached CBP claiming asylum, upon which they were taken to an ICE detention center. They had no idea that their release would mean returning to Mexico. All of the asylum seekers were lined up at the ICE facility when one of the agents approached the group saying “‘Bad news, there is no asylum, you’re going under MPP [‘Remain in Mexico’] to go to Mexico to wait for your court date.’” Recalling that moment, Yolani remembers the surprise and defeat that she felt, knowing that she was being sent to wait for her asylum hearings in Mexico. She was sent to Nogales in January, and eight months later, she is still waiting. “Living in Nogales is total fear, uncertainty… We fled violence just to be returned to live in a situation that is even worse.” She expresses gratitude to the groups that have helped her and her daughter on their journey, but lists all the things that they still lack: a place to live, education, access to healthcare, and their mental health. “Our lives are on hold.”

As time drags on for Yolani and Yovely, she has begun to participate in the growing spirit of migrant activism among the migrant community at KBI. Over the past weeks, she has participated in the SaveAsylum protests, joined coalition Zoom meetings to be part of the planning, and has decided to open up about her story and share it during the SaveAsylum event on September 21st. Her desires are simple: “We don’t leave our countries to make ourselves rich in another, nor be a burden. We come simply to live, to save our lives, and give a better life to our children.” Her request, however, requires spokespersons, advocates, organizing, and tireless advocacy: “I ask that the people in the US help us, we’re asking for help. Don’t leave us here under MPP [‘Remain in Mexico’], which is like leaving us to our predators.”